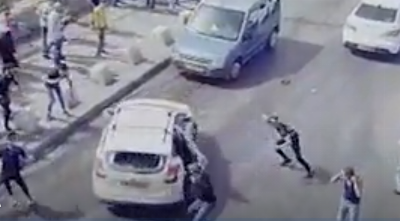 A group of Palestinian rioters attacked a Jewish manâs car outside the Old City of Jerusalem on Monday morning, resulting in him driving the vehicle into one of them.

Video footage from the scene (above) showed the young Arab men throwing rocks and other objects at the car as it came to a stop due to traffic near the Lions Gate entrance to the Old City. They were then seen trying to drag him and his passengers out of the vehicle.

The driver then attempted to speed away and rammed his car into one of the rioters, getting his vehicle stuck on the raised curb. The condition of the Palestinian man who was hit by the car was not immediately known, though he was seen getting up and walking away after the crash.

A number of people then tried to attack the driver and passenger, but they were kept back by a police officer who arrived at the scene with his gun drawn.

According to police, at one point the officer, named as Amir Ben-Kiki, fired his pistol into the air in order to keep the mob back.

The driver, who gave his name as Efraim, and a passenger were taken to Jerusalemâs Hadassah Mount Scopus Medical Center for treatment. âIf the lone cop [who arrived at the scene] had got there any later, it would have ended in murder,â Efraim said.

Police said officers were looking for the rioters who attacked the vehicle.

The incident outside the Old City came as Muslim worshipers and Israeli riot police clashed fiercely on the Temple Mount amid skyrocketing tensions in the capital. Palestinian protesters threw rocks and launched fireworks at the police officers, who responded with tear gas, stun grenades and rubber-coated bullets.

The Palestinian Red Crescent said over 300 people were injured in the clashes to varying degrees, with 205 hospitalized and seven in serious condition. At least 21 police officers were wounded, the police said.

Sunday night saw fierce clashes between Palestinian protesters and police in Jerusalem. At least 25 people were wounded and 23 people arrested.

The Temple Mount is considered holy by both Muslims and Jews. The site contains the Al-Aqsa Mosque â the third holiest site in Islam â and is revered by Jews as their holiest site, where both biblical Temples stood. Jews have been barred from entering the site in recent days amid the tensions, which coincide with the end of the holy Muslim month of Ramadan.

In light of the ongoing unrest in the Old City, on Monday morning the police announced that they would not be allowing non-Muslim Israelis to visit the Temple Mount during the day.

âAfter a security assessment that concluded a short while agoâ¦ the police commissioner [Kobi Shabtai] decided at this stage not to hold visits within the Temple Mount,â police said in a statement Monday morning, referring to the entry of Jews. Jews are usually allowed to visit the compound on certain hours on weekdays, under numerous restrictions, but not to pray there.

The police announcement came shortly before the scheduled start of the visits and after hundreds of Jews had already made their way toward the Temple Mount. It drew outrage from several right-wing lawmakers.

âThis is a disgrace,â said MK Simcha Rothman of the far-right Religious Zionism Party on Twitter. âOn the Temple Mount, the [Islamic] Waqf is purposefully organizing acts of terror and murder under our nose, and nobody says anything. I will come this morning to the Mountâs entry.â

Lawmakers from the Yamina party also condemned the decision, with MK Matan Kahana saying the Temple Mount âshould be a safe place open to Jews and members of all religionsâ and MK Amichai Chikli calling it âcapitulation to Palestinian violence and terrorism.â

Left-wing lawmakers called on the police and security forces to do whatever was necessary to avoid bloodshed. Monday, Jerusalem Day, marked the anniversary of Israelâs unification of the city with the capture of East Jerusalem from Jordan in the 1967 Six Day War.

âAs we celebrate Jerusalem Day, security forces must do absolutely everything to ensure the day passes peacefully. To calm, to calibrate, to manage the tension so that nobody is hurt, whatever it takes,â Labor Party leader Merav Michaeli said in a statement.

Yair Golan, a former Israel Defense Forces general and current member of the left-wing Meretz party, said the police should also call off the planned âFlag Marchâ in the Old City, in which thousands of predominantly right-wing Israelis walk through the area with Israeli flags, singing religious and nationalistic songs.

âThe Flag March should be canceled. Conflict should be minimized. We must prevent the conflagration. At the end of the day, our children will pay the price for the rampant nationalism, the false pride, the cowardice to do something unpopular,â Golan said.

The police statement said thousands of officers had been deployed throughout Jerusalem and its Old City since early Monday morning âto secure the events and to protect the publicâs safety.â