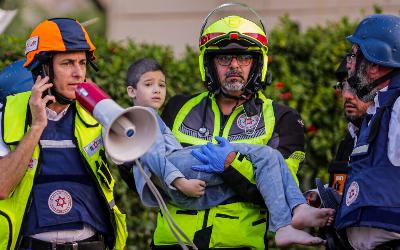 A medic carries a wounded child from an apartment building in Ashkelon hit by a rocket fired from the Gaza Strip on May 11, 2021 (Flash90)

A woman was killed and and a person was critically wounded in Rishon Lezion after terrorists in the Gaza Strip fired a barrage of rockets in the direction of Tel Aviv late Tuesday night setting off sirens throughout the center of the country.

The barrage came hours after Hamas warned Israel that it would fire missiles into Tel Aviv if the IDF continued to strike buildings in the Gaza Strip.

Another rocket struck a bus in Holon, just south of Tel Aviv. Four people were injured in Holon including the driver of the bus who was critically injured. Another three people were in moderate condition after being injured in the attack, including a five-year-old child.

Earlier in the day, two women were killed in Ashkelon on Tuesday as barrages of rockets struck the southern city and the IDF continued to target Hamas and Palestinian Islamic Jihad (PIJ) terrorist sites throughout the Gaza Strip.

One of the women was identified as Soumya Santhosh, an Indian national who worked as a caregiver for an elderly woman in Ashkelon. Santhosh was killed in the strike while the elderly woman sustained serious injuries.

The rockets fired at Tel Aviv set off sirens in Herziliya, Ra'anana and the Sharon region. The barrage came after Israel bombed a 13-story building in Gaza.

Over 700 rockets were fired into Israel from Gaza since Monday, the army said, adding that 150 fell inside the Strip and another 200 were intercepted by the Iron Dome.

Prime Minister Benjamin Netanyahu announced that the intensity and rate of attacks will increase following a visit to the IDF's Southern Command headquarter.

"We are in the midst of a campaign," he said. "Since yesterday, the IDF has been attacking hundreds of Hamas and Islamic Jihad sites in Gaza. We have neutralized commanders, we have hit many of their quality targets. Hamas will be struck in ways that it did not expect."

The Israelis were killed - one woman in her 60s and the other in her 80s - when rockets slammed into their homes in Ashkelon. Minutes later the IDF reported that it had killed two top PIJ commanders responsible for rocket fire in Gaza.

Over 90 Israelis have been injured as close to a dozen buildings in Ashdod and Ashkelon were hit by rockets, according to Israel Police. One of the buildings was a school.

Israel has also begun taking out commanders, Zilberman said, including the commander of Hamasâs anti-tank guided missile unit, Iyad Fathi Faik Sharir, who has carried out a number of attacks against Israel in the past.

âThe ATGM unit in Gaza City was prepared to carry out anti-tank guided missile attacks at the time of the strike,â the military said.

One of the Palestinian terrorists killed was identified as Samah Abed al-Mamlouk. The IDF and Shin Bet (Israel Security Agency) said that he was attacked in a hideout together with a number of additional Islamic Jihad operatives. Mamlouk, the IDF said, was in charge of PIJ's rocket arsenal.

In another strike, Hassan Abu al-Atta, deputy commander of Islamic Jihad's Gaza Brigade, was also killed when the IDF struck an apartment in an eight-story building in Gaza's Rimal neighborhood. He was the brother of Baha abu Al-Ata who was killed in an Israeli targeted killing 2019.

Earlier Tuesday, Defense Minister Benny Gantz approved the call-up of 5,000 reservists as the IDF prepared for a large-scale offensive in the Gaza Strip as rocket attacks against southern Israel continued.

"For every day of shooting at the citizens of Israel - we will send [Hamas and PIJ] back years and hit them hard," Gantz said at an operational assessment with Southern Command officers and heads of local municipalities in the South.

The 101st Battalion of the Paratroopers Brigade and the Egoz commando unit were called up to southern Israel and the 202nd Battalion was called up to the West Bank on Tuesday morning.

Gantz said Tuesday evening that he anticipates Hamas will make a "victory speech," but that the reality is they will suffer a "very serious blow."

"We are less than a day since the start of the operation, carrying out a massive wave of attacks in a campaign that began in Jerusalem. We have embarked on a campaign that will hurt Hamas seriously."

Speaking to reporters in the south next to an Iron Dome battery, Gantz said that "the purpose of the operation is to strike Hamas hard, to weaken it and to make it regret its decision."

IDF Chief of Staff Lt.-Gen. Aviv Kohavi also ordered the reinforcement of the Gaza Division with infantry and armored brigades along with the continued redeployment of intelligence and air units.

Kohavi ordered the continued striking of Hamas and PIJ weapons and storage sites as well as the expanding of the strikes to other targets including operatives of the terror groups.

âThe IDF will continue to act resolutely to restore security to the residents of the South, and all commanders must prepare for the expansion of the campaign, with no time limit,â the IDF said in a statement.

The IDF struck over 130 targets throughout Gaza overnight Monday as southern Israel was bombarded by over 480 rockets since Monday afternoon, injuring over 90 Israelis.

In retaliation for the rocket fire that terror groups said came as part of an operation called âSword of Jerusalem," the IDF carried out waves of airstrikes against terror targets in an operation they call âGuardians of the Wall.â

Shortly afterwards, a number of barrages of rockets were fired towards Ashdod and Ashkelon, with three residential buildings hit directly by rockets, leading to light injuries.

Hamas took responsibility for the barrages, stating that the "Al-Qassam Brigades directed the largest missile strike so far on the occupied cities of Ashdod and Ashkelon, in response to the enemy's continued targeting of houses and resistance men, and the next is greater, God willing."

IDF Spokesperson Brig.-Gen. Hidai Zilberman warned in the morning that the military is âprepared for a variety of scenariosâ including an escalation and said that the operation would last âseveral daysâ and would deal a hard blow to Hamas.

The 101st Battalion of the Paratroopers Brigade and the Egoz commando unit were called up to southern Israel and the 202nd Battalion was called up to the West Bank on Tuesday morning.

Under orders from the IDF Home Front Command, local councils - within a 40 kilometer radius of the Gaza Strip - shut schools on Tuesday and banned large public gatherings. Under the restrictions, only 10 people can gather outside and 100 inside, as long as there is a bomb shelter nearby that can accommodate all participants. In the Shfela region, up to 30 people can gather outside and 300 inside.

âWe will continue to act vigorously against Hamas and other terror organizations,â Zilberman said, adding that Hamas is responsible for âwhat is happening and will bear the consequences.â

Referring to the casualties in Gaza, he said that while Israel âtakes precautionsâ to minimize possible harm to civilians during its military operations, Hamas âdeliberately places its military assets in the heart of the civilian population in Gaza.â

The spokesman stressed that while more than 200 rockets had been fired toward Israel, a third of them fell inside Gaza. The Iron Dome missile defense system has been having a 90% success rate in intercepting dozens of rockets fired from the Strip, he said.

One rocket struck a house in Nir Am, in the Sha'ar Hanegev Regional Council, shortly after midnight on Monday night; no injuries were reported.

On Tuesday morning, at around 6 a.m., a wave of rockets hit two residences in Ashkelon. One rocket hit a family home; the father suffered moderate-to-serious injuries to his head, the mother was in moderate condition and the children suffered from light injuries. Later in the day, a number of residential buildings in Ashdod and Ashkelon were hit by rockets.

Hamas had threatened Israel on Monday that it would launch the rockets due to the ongoing clashes in Jerusalem and shortly after 6 p.m. seven rockets were fired towards the capital.

Hamas warned Egyptian officials overnight on Monday that the terrorist groups in Gaza refused to engage in any negotiations unless Israel withdraws security forces from the Temple Mount and Sheikh Jarrah neighborhood and releases all those detained in recent clashes in Jerusalem and the West Bank, according to Al-Araby Al-Jadeed. Hamas also demanded the canceling of planned evictions in Sheikh Jarrah.

The terrorist group told Egyptian officials that they were "completely dropping" previous agreements reached with Israel and starting at square zero.

Egyptian officials estimate that Israel and Gaza are heading to a further escalation. The officials reportedly asked for time to try and contain the crisis and persuade Israel to take a step back before clashes reach "the point of no return."

Similarly to Hamas, the IDF is also not expressing interest in a ceasefire at the moment, with Zilberman stating in response to questions about a possible ceasefire "Talk to the Palestinians. I know nothing about that."

An anti-tank guided missile also struck a civilian vehicle near Sderot, causing light injuries to the driver, who was just several meters from his vehicle. He was transferred to hospital for medical treatment.

An IDF drill, known as âChariots of Fire,â which was meant to be the militaryâs largest exercise and would have involved all units of the IDF, was postponed. "Chief of Staff Aviv Kohavi ordered the IDF to focus its efforts on preparation and readiness for the possible scenarios of escalating [violence],â the military said in a statement.