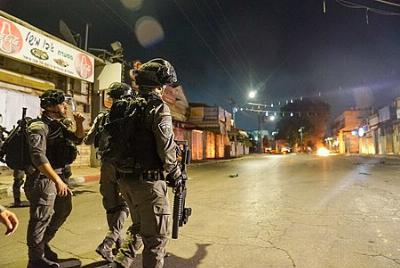 A month after Operation Guardian of the Walls, the IDF continues to struggle to maintain calm in the West Bank. With Israelâs attention focused on the Gaza Strip, the flames of violence in the West Bank are at risk of exploding.

According to data released by the Shin Bet (Israel Security Agency), there were 592 attacks in the West Bank and another 178 in Jerusalem in the month of May, compared to a total of 104 in April (80 in the West Bank and 24 in Jerusalem). The May attacks included 401 firebombings, 33 pipe bombs, 87 arson attacks, 47 small-arms fire, two grenade attacks, one vehicular attack and others.

One Israeli civilian, Yehuda Guetta, was also killed in a shooting attack at the Tapuah junction in early May by 44 year-old Muntasir Shalabi.

Most of the attacks that took place were not carried out by groups, but by lone wolves. Those kinds of attacks, the IDF has admitted, are much more challenging to thwart than attacks planned by groups. If you donât have an organization you donât have the signature of the preparedness of the specific attack. Despite the challenges, the great majority of attacks have been thwarted by security forces.

But, the high number of thwarted attacks also indicate that the flames of violence are growing in the West Bank.

While there have been significantly less vehicular attacks as well as stabbings and shooting attacks towards IDF forces they remain a major threat, especially towards drivers on the roads shared by both Palestinians and Israelis. According to the IDF, shooting or vehicular ramming attacks are more likely to be carried out by young men, and children are behind many cases of stone throwing.

Along with the high number of attacks against Israeli targets, a report by Ynet news found that 34 Palestinians were killed over the past month, âmore than during any month in the past 10 years.â

Comparing the past month to the height of the wave of knife and vehicular-ramming attacks that took place between 2015-2016, an average of 26 Palestinians were killed every month.

With the cancellation of the May Palestinian elections in late April, the public has lost all faith in their leaders who they say have abandoned the cause a long time ago. PA President Mahmoud Abbas, they say, has remained silent about the beating of protesters and worshipers by Israel.

The reestablishment of the illegal settlement of Evyatar has led to repeated violent clashes between Israeli security forces and local Palestinians. Four Palestinian teenagers have been killed in the recent weeks.

Like on the Gaza border, Palestinian youths have been taking part in night disturbances with loud riots and setting fires to tires. In one video uploaded to Youtube, demonstrators chant âGreeting from the steadfast village of Beita to the steadfast cities in Gaza.â

Evyatar was reestablished by settlers in April on land that historically belonged to the Palestinian villages of Beita, Kablan and Yitma. Residents have been barred to the land for decades by the Israeli military for security reasons.

The IDF has made it clear that the outpost will be demolished, with the IDFâs Central Command writing that âthe Evyatar outpost was established illegally and everything was done in complete violation of the law.â

But, even when it will be demolished, locals arenât holding their breath. They know that another illegal settlement will likely be built on another hill.

And while the fighting between Israel and the terror groups in the Gaza Strip ended, the initial reasons behind Hamasâs rocket fire remains: clashes on the Temple Mount. Last week nine Palestinians were wounded by sponge-tipped bullets and stun grenades used by Israeli Police when they clashed at the holy site.

While rockets are not raining down on Israel, incendiary balloons have caused dozens of fires to rage across southern Israel.

Hamas has repeatedly warned that it would once again fire rockets into Israel and restart hostilities over developments in Jerusalem. Terror groups on Tuesday warned that if Israel does not allow humanitarian relief into the blockaded enclave, they will once again resort to violence.

âWe warn the Israeli enemy and its allies of delaying the lifting of the siege. The enemy will not succeed with its extortion policy and we will not kick back as our people are pushed over,â the groups said in a statement quoted by Israeli media.

âIt was a bad meeting,â Sinwar said. It was not positive at all, and we clarified to the [United Nations] delegation that we would hold a meeting of Islamic and national factions in Gaza to decide our next steps.â

So while the world watches as southern Israel burns from balloons launched from Gaza, the flames are growing just as deadly in the West Bank. Israel needs to get both fires under control before itâs too late.