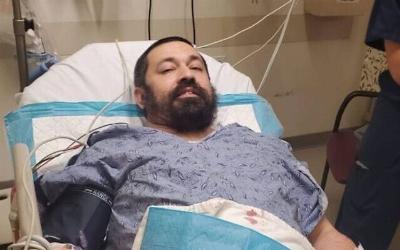 A Boston rabbi who was stabbed multiple times on Thursday in a suspected hate crime said he believes "unequivocally" that the attack was antisemitic in nature and that the perpetrator meant to kill him. Rabbi Shlomo Noginski was speaking on the phone on the steps outside a Jewish day school in Boston's Brighton neighborhood at around 1 p.m. on Thursday, when he was approached by a suspect brandishing a gun and knife. The perpetrator drew the gun and told Noginski to take him to his car. When he tried to force him inside, Noginski started to flee and the suspect chased him and stabbed him several times. Noginski was taken to the hospital for treatment and was released on Friday. Police arrested Khaled Awad, 24, for the attack and charged him with assault and battery with a dangerous weapon. "It hurts. I was stabbed eight times, mainly in the arm, some in the stomach [area]," Noginski told Channel 12 news on Friday from his home where he was recovering from his injuries. The attacker, he said, "tried to hurt me dozens of times. I thank God for this big miracle, thank God it ended this way." Police said the motive for the stabbing was unclear as the investigation is underway. District Attorney Rachael Rollins said at a vigil in support of Noginksi on Friday that her office has opened a civil rights investigation to determine whether the stabbing is a hate crime. "We have to recognize that antisemitism is on the rise, and we need to hold people accountable when they do this, so that they are made an example of," Rollins said at the vigil not far from the stabbing site, attended by several hundred people. "Unequivocally, it was an antisemitic incident," Noginski told Channel 12 on Friday. "This is how I feel, I felt in that moment that he was trying to kill me, not [trying] to steal my car. He wanted to capture me and kill me." The rabbi said he offered the attacker the keys to his car. "He didn't want the car, he didn't ask for my wallet, or for money, or anything. He didn't want anything. He really tried to aim for my heart, my body, which is significant." Noginski shot down the possibility that the attack was a botched robbery. "I think that if something goes wrong in a robbery, there's no sense in pursuing the person and stabbing them for long moments. I don't see another possibility, that it was something else. There's nothing else it could be," he said. Awad pleaded not guilty on Friday to the charge and was being held without bail at his arraignment, pending a hearing to determine whether he is a danger to society. The attorney who represented Awad could not be reached for comment. A number for Awad, who's from Brighton, could not be found. The hearing to determine whether Awas is a danger is scheduled for July 8. Awad has no record in Massachusetts, but has faced charges of battery and theft in Florida, and was sent to a mental health facility there, prosecutors said. According to court documents, when police located Awad, he pointed what appeared to be a firearm at them. Three officers drew their firearms and ordered him to drop his weapon multiple times, authorities said. The suspect then lowered his weapon and threw it to the ground. The suspect kicked one of the officers in the stomach as he was being assisted into a transport vehicle for booking, police said. As soon as the school became aware of the stabbing, the facility went into lockdown and no children were in danger, Rabbi Dan Rodkin, executive director of Shaloh House, said in a Facebook post. Noginski is an Israeli citizen who came to the Boston area as an emissary to spread the Chabad message, Consul General of Israel to New England Meron Reuben told the Boston Herald. "We are horrified by what has happened," Reuben said. "I am grateful to the Boston Police Department for their rapid response, and relieved that the perpetrator is in custody. I am looking forward to returning to my work as soon as possible," Noginski told Lubavitch.com after the attack. Some who attended Friday's vigil think the stabbing was a hate crime. "I don't think there's a member of our Jewish community who did not hear about this stabbing and think to themselves, 'Oh my God, it's happened here in Boston,'" said Marc Baker, president of Combined Jewish Philanthropies. The attack on the rabbi was an attack on the entire city, acting Mayor Kim Janey said: "I believe that an attack on any member of our community is an attack on all of us."