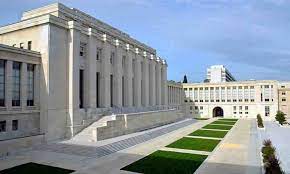 The United Nations in Geneva (File photo)
"In 2021 the Israeli electorate traded former Prime Minister Benjamin Netanyahuâs conservative government for a centrist coalition backed by Arab parliamentarians. But the relentless assault against the Jewish State by the United Nations will continue in 2022 and beyond. Last week the General Assembly signed off on a multimillion dollar sinecure for a permanent 'Commission of Inquiry' into its most hated member.

The U.N.âs Human Rights Council resolved in May to 'investigate violations of international humanitarian law' in the wake of the 11-day Gaza war between Israel and Hamas. The conscientious proponent of the resolution was Pakistanâlast seen supporting the Talibanâs Afghanistan takeoverâwith human-rights champions China and Cuba also voting yes. The cause of the May conflict was a rocket barrage on Israel by the Iran-backed terrorist groups Hamas, which rules the Gaza strip, and Islamic Jihad. The pretext was an ongoing court battle between Jews and Palestinians over property in an East Jerusalem neighborhood. Because of the success of Israelâs Iron Dome missile defenses, alarms and widespread bomb shelters, only 13 Israelis were killed in the indiscriminate onslaught of more than 4,000 rockets.

About 260 Palestinians were killed as Israelâs air force tried to disable terrorist attack sites packed into civilian areas in Gaza. Israel has said 225 of those killed were militants and some of the remainder were killed by Hamas rockets that fell short of Israel. The U.N. has estimated that half or fewer of the Palestinians killed in the conflict were militants.

Israelâs defense of its civilians was lawful, targeted and restrained, but the U.N. wants to use the war as a pretext to indict Israel for 'crimes,' real or imagined. The commission staff, led by figures with records of anti-Israel rhetoric, are charged with 'investigating all underlying root causes of recurrent tensions' in the Israeli-Palestinian conflict (meaning causes excluding Hamas terrorism) and delivering biannual U.N. reports indefinitely into the future.

Israel is already an irrational fixation of the U.N., which issued 17 resolutions condemning it in 2020. But the funding stream approved at the General Assembly Thursday further institutionalizes the anti-Israel libel machine. The Jerusalem Center for Public Affairs notes that the new commission will have 24 permanent staff, compared to 20 permanent staff for the Human Rights Council branch covering all of Asia. With an annual budget greater than $5 million, it will fund '790 days of travel for experts and staff every year from 2022 on.'

The commission has issued a public 'call for submissions' and will recommend 'criminal and command responsibility' for anything Israeli officials have ever done or may do in the futureâan extraordinary attack on the sovereignty of a democratic member state.

As international order frays, the U.N. is focused on enlarging impotent bureaucracies and encouraging malevolent ideological campaigns. This will inflame Israeli opinion and do nothing to solve the conflict. The Biden Administration says it will oppose the new commission, but it ought to use it as a reason to exit the Human Rights Council and stop funding it."
Date
December 27, 2021
Title
The U.N.âs Israel Libel Machine Expands, The Wall Street Journal
Original Source
https://www.wsj.com/articles/the-u-n-s-israel-libel-machine-expands-11640648491
Attachment
Click here to view this article in MS Word/PDF format