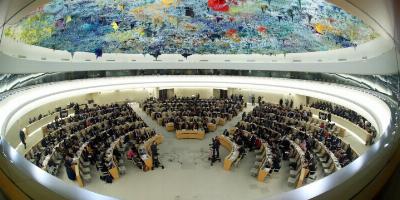 "Despots and tyrants always insist on following the 'rule of law.' In the 20th century, leaders of the Soviet Union dispatched tens of millions of enemies â real and imagined â to the Siberian Gulag or to firing squads, after delineating the law or code that had been violated.

From the moment Hitler gained power in Germany in 1933, the Nazis did not disband the courts; instead, they co-opted the judges and lawyers. Everything had to follow a set of strict legal codes and doctrines.

Throughout the 20th century, and until this day, dictators and tyrants convene high-profile show trials, convened by judges and officials invoking 'the rule of law' to demean and dehumanize 'enemies of the people.'

Missing from these show trials, whether convened in Havana, Pyongyang, Beijing, Baghdad, or Tehran, was any semblance of real justice.

In 2022, we are witnessing new assaults on justice, equality, and fairness, this time from the very global institution founded to protect and promote human dignity. Once again Jews â Israeli Jews â are the targets. But these perpetrators are not neo-Nazi thugs or jackbooted soldiers. They are well-tailored diplomats, lawyers, and NGOs operating with a massive budget and an open-ended mandate, to demonize and de-legitimize the Jewish state.

Welcome to the United Nations Human Rights Council (UNHRC)âs Commission of Inquiry on the events that took place during Israelâs Operation Guardian of the Walls in May 2020, when Israel defended itself from 4,500 rockets directed at Israeli civilians by Hamas and other terrorists in Gaza.

According to a new report by the International Legal Forum (ILF), which was written in collaboration with the Simon Wiesenthal Center and 25 other organizations, this 'independent UN inquiry' is fixed and staged against Israel, for several reasons.

Firstly, the resolution establishing the Commission makes no mention of Hamas. How can you investigate a conflict without even mentioning one of the sides? And why wouldnât the UN mention terrorist group Hamas? In fact, the UNHRC itself has not once condemned Hamas, despite the terror groupâs trail of suicide terrorism, kidnapping, and missiles targeting the Jewish state.

This obviously stems from the UNHRCâs pathological and institutionalized hatred of Israel, which has manifested itself into serially condemning Israel more times than the other real human rights abusers staining our planet.

Furthermore, this Commission, the 9th to target Israel exclusively, is empowered to function in perpetuity, with the mandate to go back to the founding of the Jewish state in 1948 â 74 years ago.

But perhaps the most egregious element of the UNHRCâs commission is that the individual appointed to lead it â former UN High Commissioner for Human Rights, South African, Navi Pillay â harbors a deep animosity towards Israel.

As uncovered by the new 'Fixed Inquiry' Report, Pillay supports the antisemitic, anti-peace BDS movement, refers to Israel as an 'apartheid regime,' and calls for a military embargo against the only Jewish state. She even hired staff from an Israeli-designated terror organization.

Most importantly, she remains an ardent supporter of the infamous 2001 Durban Conference which degenerated into one of the most notorious antisemitic events of the second half of the 20th century. I know it well, because I was there during this hate-fest as the spokesman for Jewish groups, and I was personally targeted by Jew-haters.

Israel will defend itself from this kangaroo court, and from those who are sure to build on this new mountain of lies. However, the UNHRCâs obsession with Israel is preventing other communities from being heard in the halls of this UN body. Victims of the fundamentalist regime in Iran, dissidents in Russia, Uyghurs in Chinaâs concentration camps, and others are being tragically overlooked.

Democratic UN member states led by the United States and the United Kingdom must put an end to this travesty, and call this upcoming report out for what it is â a fixed inquiry against Israel. Until the UNHRC stops protecting tyrants and designated terror groups, the world should see it as a 'diplomatic' tool for those who want to dismantle democracies, pervert international law, and distort the idea of protecting human rights."

A Legal Inquisition: The U.N.âs Latest Attempt to Demonize the Jewish State Is Exposed