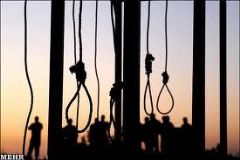 According to the Iranian State Broadcasting eight prisoners were hanged in the prison of Bandar Abbas (Southern Iran) on Sunday. One of the prisoners was charged with rape, while the seven others were sentenced to death for drug-related charges. The Young Journalists Club", run by the authorities, quoted Hormozgan prosecutor saying that these prisoners were charged with trafficking of one ton of opium, heroin and hashish.

None of the prisoners were identified by name.

Official website of the Iranian Judiciary in the Markazi Province (South of Tehran) reported about execution of four prisoners convicted of drug-related charges in the prison of Arak.

Tree of the prisoners were identified as "Mohammad M", "Ehsan J." and "Amir Hossein G." charged with participation in production of 59 kilograms and 68 grams of the narcotic drug crystal. "Mohammad M." and "Ehsan J." were in addition charges with selling 2 and 13 kilograms of crystal that they had produced, respectively.

The fourth prisoner was identified as "Reza Z." charged with participation in possession and trafficking of 972 grams of heroin, said the report.