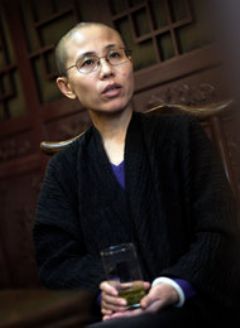 2 Prominent Women Under Detention Are Hospitalized

Two prominent women - Liu Xia and Cao Shunli - were hospitalized in poor health this week, after months or years of detention, according to their lawyers and friends.

Ms. Liu, 52, the wife of the jailed Nobel Peace laureate Liu Xiaobo, has been under effective house arrest for three years as her husband serves an 11-year jail term for "inciting subversion of state power." She was hospitalized on Tuesday, or Sunday - accounts vary - with severe depression and a heart ailment. Her emotional and mental state has long been regarded as fragile by supporters.

Ms. Cao, 52, a former cadre at the now-disbanded Ministry of Labor and Manpower, was detained after she took part in sit-down protests last year outside the Foreign Ministry, where she and others called for ordinary Chinese to be allowed to contribute to an assessment of human rights in China, part of the United Nations' Universal Periodical Review. The protests had failed - Chinese officials did not allow them to contribute to the country's human rights report, and late last year China was elected to the United Nations Human Rights Council despite what critics called a record of rights abuses.

On Thursday morning, Ms. Cao was sent to an emergency hospital in Beijing where she was put on a ventilator, said her lawyer, Wang Yu, and a friend, Liu Xiaofang. Ms. Wang and Ms. Liu said she had tuberculosis, a liver complaint and uterine fibroids.

Ms. Cao, who was barred by security officials from traveling to Geneva late last year to take part in a training course run by a civil society group on United Nations rights mechanisms, was rushed to Beijing's Qinghe 999 Hospital from the Chaoyang Detention Center, where she was being held pending trial for "picking quarrels and provoking trouble," Ms. Wang said.

The lawyer said Ms. Cao had contracted the tuberculosis and liver ailment while in detention and that her previous medical examinations had been clear.

Her friend, Ms. Liu, said, "When I saw her in the hospital, she was on a ventilator and couldn't talk. Her lungs were full of sputum."

Ms. Liu said Ms. Cao's health had suffered in detention. "She said she was not guilty so they were treating her badly," she said. "A person like that needs good nourishment and medical care, and she was not getting it."

"The police forbid her from communicating with the outside world, not even to say what hospital she is in, or about her condition," Mr. Mo said. "Not just her - her relatives were also told to be silent."

He said it was the second time she had been hospitalized in recent years.

"Her health has been very poor for a long time, not just her heart," he said. "Three years of house arrest have aggravated her health. She tried to apply for medical treatment overseas, but the authorities refused."

"She is not allowed to say anything," Mr. Mo added. "Indeed, I'm very concerned about her. What the police are doing - restricting her personal freedom, denying her medical exams and treatment, barring visitors from the hospital, and forbidding any information on her condition â is itself illegal."