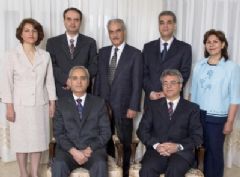 7 Baha’is sentenced to 20 years in Iran

Seven Baha'i leaders in Iran have each received 20-year prison sentences, according to reports received by the Baha'i International Community, the group said Sunday.

"If this news proves to be accurate, it represents a deeply shocking outcome to the case of these innocent and harmless people," said Bani Dugal, the principal representative of the Baha'i International Community to the United Nations.

Word of the sentences came from an Iranian-based group called the Committee of Human Rights Defenders, according to Diane Ala'i, another Baha'i U.N representative. The Baha'i International Community is working to confirm the reports, she said.

The leaders were accused of espionage, propaganda activities against the Islamic order, and the establishment of an illegal administration, among other allegations, according to the Baha'i International Community. The group denied all charges.

"We understand that (those sentenced) have been informed of this sentence and that their lawyers are in the process of launching an appeal," Dugal said in a statement Sunday.

The Baha'i leadersâtwo women and five menâhave been held in Tehran's notorious Evin prison since they were arrested in 2008.

They are considered the nation's top-ranking Baha'is The leaders' trial comprised six brief court appearances beginning last January, after they had been held without charges for up to 20 months, the Baha'i International Community said. The group said the trial, during which the accused had roughly one hour's access to legal counsel, ended June 14. The verdict is believed to have been handed down Sunday, Ala'i said, though she had no details on the nature of the convictions.

The Baha'i faith originated in 19th century Persia, but the constitution of today's Islamic republic does not recognize it as a religion and considers the followers as apostates.

A U.N. State Department report released earlier this year blasted the Iranian government for its treatment of those practicing the Baha'i faith.

The report said Iran's government prevents Baha'is from gathering in homes to worship and bans Baha'is from public schools, universities, the social pension system and government leadership posts unless they conceal their religion.

"The government repeatedly pressured Baha'is to recant their religious beliefs in exchange for relief from mistreatment," the report said.