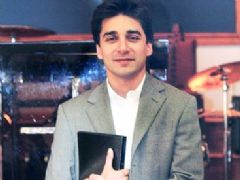 A Christian Prisoner in Iran

Iran's leaders are preparing for another visit to New York this month for the U.N. General Assembly, but many of their citizens aren't going anywhere as they languish in the regime's prisons for political crimes. One notable case is Farshid Fathi, an evangelical Christian pastor who this week will spend his 35th birthday in jail.

The intelligence ministry arrested Pastor Fathi in December 2010. The father of two then spent a year in solitary and semi-solitary confinement in Evin prison's Ward 209, reserved for political cases. There he was interrogated for hours on end and subjected to psychological abuse, according to an Iranian Christian convert who has also spent time in prison for his beliefs, currently resides in the country and is familiar with Pastor Fathi's case.

A Tehran revolutionary court in February 2012 convicted Pastor Fathi of acting against national security and sentenced him to six years including time served. More recently he has been transferred to Rajai Shahr prison on the outskirts of Tehran, where he is sharing a cell with addicts and other common criminals who routinely harass and threaten him. When he inquired about the reason for this latest transfer, the pastor was told that it was because he sang Christian hymns.

The Iranian regime knows the political value of punishment and humiliation all-too well, and in Pastor Fathi's case his harsh imprisonment is meant to send a message to his followers. Iran's traditional Christian communities, such as Orthodox Armenians and Assyrians, are protected under the Islamic Republic's constitution as so-called People of the Book. Their daily lives are subject to various legal restrictions, however.

Their schools and church activities are closely watched, and they can't lead most public institutions.

Converts to Christianity receive harsher treatment since Tehran's authoritarians won't tolerate Shiites leaving the official religion. Apostasy is punishable by death under Shariah law, and Persian-language Bibles are banned (though contraband editions can be purchased in some bookstores). Yet the Internet has made it increasingly difficult for Tehran to root out evangelical Christianity, and the movement by some estimates claims up to 500,000 Iranian believers.

Islamic State fighters in Syria and Iraq have recently given the world a display of brutal vigilantism against minority religions. Pastor Fathi's case is a reminder that persecution also is conducted by long-established states, a truth to keep in mind as the world's leaders sit down to tea with Iran's dictators.