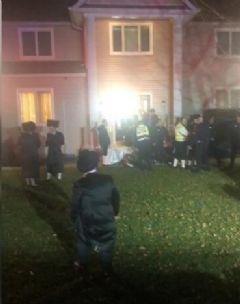 The rabbi in upstate New York had just concluded the Hanukkah candle-lighting in his home where dozens of Hasidim had gathered, when a masked man entered with a machete, stabbing five people before making a beeline to an adjacent synagogue where congregants had barricaded themselves inside, eyewitnesses said Sunday.

The attack left at least two people in critical condition and reignited fears of anti-Semitism in the insular ultra-Orthodox community, just a month after another stabbing attack and amid what officials have described as a spate of anti-Jewish assaults in the New York region.

The attacker fled the scene, but police later said they arrested a suspect after locating a car connected to the crime scene in New York City.

Eyewitnesses and others described a Hanukkah party that quickly became a scene of horror, with people trying to fend off the attacker or escape the scene.

According to accounts, the attacker entered the home of Chaim Leibish Rottenberg in Monsey around 10 p.m. and silently began slashing those present. In the ensuing melee, attendees responded by hurling tables and chairs to fend off the knifeman, who ultimately left the building in the direction of the nearby synagogue.

He fled the scene after realizing the Jewish house of worship was locked, eyewitnesses said.

"A man walked into the rabbi's house, immediately after candle-lighting," Yosef Eliyahu told Israel's Kan public broadcaster. "He entered the dining hall where the candle-lighting was taking place and began stabbing people."

Eliyahu said he first rushed the rabbi's grandchildren, and then others, outdoors. "I pushed them all outside, I started screaming and I ran toward the synagogue," he said, adding that the attacker headed to the synagogue but fled after finding the doors locked.

"I was praying for my life," witness Aron Kohn, 65, told the New York Times, describing the knife used by the attacker as "the size of a broomstick."

"He started attacking people right away as soon as he came in the door. We didn't have time to react at all," said Kohn, adding in interviews with other US media that he also started throwing chairs and tables at the intruder.

Kohn said members of the congregation, Netzach Yisroel, apparently barricaded themselves in the synagogue after hearing the yelling from the rabbi's home.

"I saw someone lying on the stairs," Klein said. "I saw people getting carried out. I saw blood. One guy was lying limp on the stretcher."

Jack Stein, a neighbor who said he spoke to eyewitnesses, told Israel's Channel 13 the attacker targeted a developmentally disabled man.

"There was insane hysteria, and someone threw a chair at him," he said. "The person who threw the chair probably made him more angry and he turned to him and stabbed him another three times. From there, he went into the kitchen, where there was a man who probably walked in from the courtyard, a man with a slight [developmental] disability who stood there shocked and paralyzed by fear. He was hurt the most."

Yossi Gestetner, a co-founder of the OJPAC (Orthodox Jewish Public Affairs Council) for the Hudson Valley region, told the New York Times one of the victims was a son of the rabbi.

"The house had many dozens of people in there," Gestetner said. "It was a Hanukkah celebration."

Five people were hurt by in the attack, including three whose condition was described as critical or severe.

A month before the attack, a Jewish man was stabbed while walking to synagogue in Monsey in the early morning. Police have not said whether the attack was anti-Semitic in nature or if a suspect was arrested.

But Saturday's attack was immediately recognized as an assault on the large and growing ultra-Orthodox community in the upstate New York hamlet, weeks after a fatal shooting in a kosher supermarket in nearby New Jersey had also prompted fears among local Jewish residents.

Four people were killed in Jersey City, three of them at a kosher deli, which authorities said was fueled in part by anti-Semitism. The killers in the attack were affiliated with the Black Hebrew Israelite group.

"I live in Monsey, NY. We are all terrified," tweeted Eliyahu Fink.

New York City Mayor Bill De Blasio wrote that "I've spoken to longtime friends who, for the first time in their lives, are fearful to show outward signs of their Jewish faith."

The attack comes as US police battle a rash of attacks against Jewish targets.

Last year a white supremacist walked into a Pittsburgh synagogue and killed 11 people, the deadliest attack ever committed against the Jewish community in the United States.

A report in April from the Anti-Defamation League (ADL) stated that the number of anti-Semitic attacks in 2018 was close to the record of 2017, with 1,879 incidents. In response to the recent surge in hate crimes in New York, de Blasio announced Friday that the NYPD was stepping up patrols in three neighborhoods and increasing the number of visits to houses of worship.