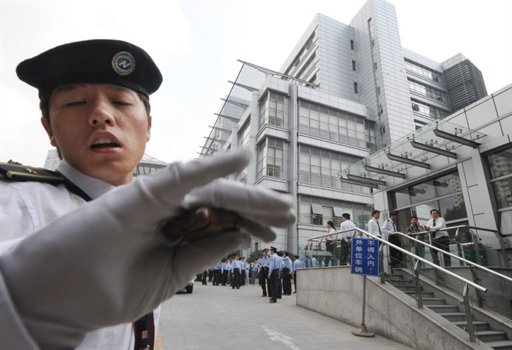 A court security official stands guard outside a court in Shanghai.
Source: AFP

The US-based rights group in a new report called on China to shut the detention facilities, many of which it said were housed in state-owned hotels, nursing homes and psychiatric care units, and bring their managers to justice.

"The existence of black jails in the heart of Beijing makes a mockery of the Chinese government's rhetoric on improving human rights and respecting the rule of law," said Sophie Richardson, the group's Asia advocacy director.

"The government should move swiftly to close these facilities, investigate those running them and provide assistance to those abused in them."

Human Rights Watch said it had compiled the report from research carried out in Beijing and several other Chinese cities in April and May this year, including interviews with 38 people who said they were held in black jails.

The group said many of those imprisoned illegally by government officials, security forces and their agents were petitioners seeking redress from authorities over a variety of problems, from land grabs to police misconduct.

According to witnesses, guards in black jails -- the existence of which has been denied by the government -- routinely subject people to abuses such as physical violence, theft, and deprivation of food, sleep and medical care.

Two-thirds of the former detainees interviewed by the rights group said they had been physically abused, and some said they were threatened with sexual violence. Witnesses said minors were among those held.

Guards told a 42-year-old woman from the southwestern province of Sichuan that if she attempted to escape, they would "take me to the male prison and let (the inmates) take turns raping (me)," the report said.

Local officials set up the jails to ensure that petitioners who have travelled to major cities to air their grievances are detained, punished and sent home, according to the rights group.

In this way, they avoid receiving penalties that are imposed if large numbers of petitioners come from their areas, Human Rights Watch said.

"China has laws that set out how arrests and detentions should take place, but the government is blatantly ignoring those in the cases of black jails and those detained in them," Richardson said.

"A failure to live up to its own legal standards -- let alone international standards -- is not the hallmark of a government aspiring to global respect."