U.N. Inaction on Afghanistan
All Actions of the UN Human Rights System Critical of Specific States, 2010 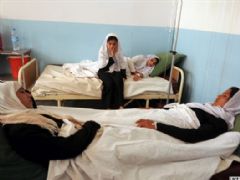 Schoolgirls lie in a hospital with symptoms of gas poisoning in Charikar, Afghanistan May 2009. Source: Radio Free Europe

'A smell like a flower reached my nose,' says hospitalized girl

KABUL - More than 80 schoolgirls have fallen ill in three cases of mass sickness over the past week in northern Afghanistan, raising fears that militants who oppose education for girls are using poison to scare them away from school.

The latest case occurred Sunday when 13 girls became sick at school, Kunduz provincial spokesman Mahbobullah Sayedi said. Another 47 complained of dizziness and nausea on Saturday, and 23 got sick last Wednesday. All complained of a strange smell in class before they fell ill.

None of the illnesses have been serious, and medical officials were still investigating the exact cause. The Health Ministry in Kunduz said blood samples were inconclusive and were being sent to Kabul for further testing.

Sayedi blamed the sickness on "enemies" who oppose education for girls. Presidential spokesman Waheed Omar said any attempt to keep girls out of school is a "terrorist act."

The Taliban and other conservative extremist groups in Afghanistan who oppose female education have been known to target schoolgirls. Girls were not allowed to attend school when the Taliban controlled most of Afghanistan until they were ousted in the 2001 U.S.-led invasion.

Last year, dozens of schoolgirls were hospitalized in Kapisa province, just northeast of Kabul, after collapsing with headaches and nausea. An unusual smell filled the schoolyard before the students fell ill. The Taliban was blamed, but research into similar mass sickenings elsewhere has suggested that some might be the result of group hysteria.

Anesa, a 9-year-old girl who was among those hospitalized Sunday, said she noticed a strange odor and then saw two of her teachers fall unconscious.

"I came out from the main hall, and I saw lots of other girls scattered everywhere. They were not feeling good," said Anesa, who gave only her first name. "Then suddenly I felt that I was losing my balance and falling."

Azizullah Safar, head of the Kunduz hospital, said many of the girls were still suffering from pain, dizziness and vomiting.

"I was in class when a smell like a flower reached my nose," said Sumaila, 12, one of the girls hospitalized. "I saw my classmates and my teacher collapse and when I opened my eyes I was in hospital."

In the south and east, where the Taliban control towns and villages, girls' schools remain shut, teachers have been threatened and some girls have been attacked with acid.

Despite the attacks, Sumaila said she hoped to return to school, if her father allows her.

"I am very scared. My parents were very worried. My father told me that I have learned a lot. I don't know whether they will still let me go to school after this," she said.