U.N. Inaction on Afghanistan
All Actions of the UN Human Rights System Critical of Specific States, 2012 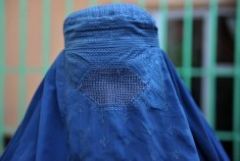 An Afghan burqa-clad woman poses for a photograph in Kabul. Afghan police have arrested four people who allegedly tried to force a woman into prostitution in western Afghanistan and beheaded her when she refused, officials told AFP. Source: AFP

An Afghan woman was reportedly beheaded after refusing to be prostituted by her mother-in-law.

20-year-old Mah Gul was killed in western Afghanistan's Herat province after her husband's mother tried to force her to sleep with another man, Agence France Presse reported.

Gul's mother-in-law, father-in-law, husband, and the man who beheaded her have been arrested for the crime.

Provincial police chief Abdul Ghafar Sayedzada said the young woman had been married for four months and that her mother-in-law had tried to prostitute her several times, AFP reported.

This is the latest beheading in Afghanistan in recent months: in August, a boy and a girl were each beheaded in separate incidents, the same week that 17 young people were shot and beheaded in Helman province, Reuters reported.

So far this year, 100 cases of violence against women have been recorded in the western part of the country alone, according to Abdul Qader Rahimi, the regional director of the government-backed human rights commission in western Afghanistan.