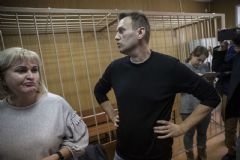 A Russian court sentenced Kremlin critic Alexei Navalny to 3Â½ years in prison, but gave credit for about a year already served, sidelining the country's most prominent opposition politician and likely fueling a burgeoning protest movement triggered by his detention last month.

Mr. Navalny, who was kept in a glass cage throughout the hearing, laughed to himself as the judge read the lengthy verdict. He drew a heart with his finger and looked at his wife, Yulia, as the judge neared the end of the sentencing.

During his testimony, the opposition politician blamed Russian President Vladimir Putin for a poisoning attack against him last year and called the court proceedings an act of cowardice. Striking at the image of Mr. Putin as a master strategist, he said the Kremlin leader never fought his enemies fairly.

"[Putin's] only method is killing people," Mr. Navalny said. "For as much as he pretends to be a great geopolitician, he'll go down in history as a poisoner."

Following the verdict, Mr. Navalny's supporters gathered in downtown Moscow, at times within earshot of the Kremlin, to protest the court decision. Riot police, who had been deployed there for much of the day, used batons to disperse them as demonstrators fled past luxury-brand stores.

Between those detained for protesting outside the courthouse and others taken into custody for demonstrating in downtown Moscow and in other cities, more than 1,400 people were detained on Tuesday and early Wednesday, according to OVD-Info, an independent law-enforcement monitoring group.

Russian prosecutors say Mr. Navalny violated conditions of a suspended sentence from 2014 by failing to check in regularly with prison authorities while he was recovering in Germany from a near-fatal poison attack last year. The 3Â½-year sentence credits the time Mr. Navalny served under house arrest, leaving him to serve 32 months behind bars.

The sentence temporarily removes a longtime thorn in the Kremlin's side, an opposition leader who aimed to unseat the ruling United Russia in parliamentary elections later this year. But the backlash could test Mr. Putin's ability to counter rising criticism from the U.S. and Europe over the case and complicate his attempts to quell the biggest nationwide street protests in almost a decade.

Over the past two weeks, since Mr. Navalny was taken into custody upon his return to Russia, the opposition politician's followers have united with a broad coalition of middle-class and middle-aged Russians angered by falling living standards and shrinking political freedoms.

Nearly 6,000 people were detained in a show of force across the country on Sunday, according to OVD-Info, the most in one day in Russia's recent history.

"Mr. Navalny's sentencing will provide more fuel in the coming weeks for protesters," said Denis Volkov, a sociologist at Moscow-based pollster Levada. "What happens after that no one knows."

In a tense courtroom exchange, Alexander Yermolenko, a top officer at the Federal Penitentiary Service, which initiated the legal move against Mr. Navalny, said the agency had no idea where the Kremlin critic was late last year and that he wasn't at his registered address.

"You had to present documents laying out respectable reasons for your failure to appear at parole inspections" he said, according to a court transcript.

Mr. Navalny said the prison service had his address in Germany, all necessary contact information and updates about his outpatient treatment. "What more could I have done?" he said.

A Russian court in 2014 gave Mr. Navalny a suspended 3Â½-year sentence in an extortion case. He had been on parole since, despite a ruling from the European Court of Human Rights that the case was political.

Mr. Navalny's legal troubles threaten to further complicate relations between Washington and Moscow. President Biden brought up the case in his first phone call with Mr. Putin last month. Secretary of State Antony Blinken said Mr. Navalny had been detained for exercising his human rights and demanded his release.

The Russian government has rebuffed comments from Western leaders over Mr. Navalny's case, saying they are actively interfering in the country's affairs. Russian officials have tried to characterize their public support as proof that Mr. Navalny and his supporters are agents of the West, which wants to destabilize Russia.

"It's not just interference in internal affairs of a sovereign state," she said on Facebook. "It's laying bare the unsightly and illegal role of the collective West in attempts to constrain Russia."

Kremlin spokesman Dmitry Peskov said no amount of external pressure would affect the work of the court. Mr. Putin, who goes to lengths to dismiss the opposition politician, including by refusing to say his name, didn't follow the trial, Mr. Peskov said.

While Mr. Navalny's sentence may fan opposition sentiment in the short term, his absence from the political landscape could see his movement, which he spent years building across the country, slowly degrade.

"His followers across the country, they can still carry on with their jobs, but this is a movement with a leader and without him we can see it perhaps slowly start to fracture," said Alexander Baunov, an analyst at the Carnegie Moscow Center.

For years, Mr. Navalny angered authorities by exposing corruption and excess in Kremlin circles but managed to stay out of prison through a combination of legal finesse and support among his followers, who have taken to the streets repeatedly to protest previous legal actions against him.

In 2013, Mr. Navalny was released from jail-in a different case against him-after thousands of his supporters protested in front of the Kremlin. Some friends of the opposition politician said he hoped similar demonstrations would see charges against him dropped.

Russian authorities announced the legal move to turn Mr. Navalny's suspended sentence into real jail time in December, even when he was still in Germany. Shortly after, Russian investigators announced they had opened an investigation into him on fraud allegations.

Mr. Navalny said the moves were attempts to scare him away from returning to Russia, but he promised to go back nonetheless. On Jan. 17, shortly after his flight touched down at a Moscow airport, he was led away by Russian officers.