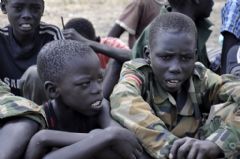 An armed group in South Sudan has abducted at least 89 boys in a northern state, the U.N. children's agency said Saturday.

The boys, some as young as 13, were abducted near Malakal, the capital of Upper Nile state, according to a Unicef statement.

Malakal, which is currently under government control, has recently seen intense fighting between rebel forces and government troops who accuse each other of violating multiple peace agreements.

Armed men surrounded the community and searched house by house, forcibly taking boys older than 12, said witnesses, according to the Unicef statement, which said the latest abductions were carried out while the children were doing their exams in the Wau Shilluk area. The number of those abducted could be much higher, it added.

It is not clear which group carried out the abductions.

Last year 12,000 children were used as soldiers by armed forces and groups across South Sudan, according to Unicef.

"The recruitment and use of children by armed forces destroys families and communities. Children are exposed to incomprehensible levels of violence, they lose their families and their chance to go to school," said Jonathan Veitch, the Unicef representative in South Sudan.