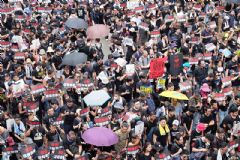 Thousands of people took to Hong Kong's streets to stage the city's biggest protest in months, and police moved swiftly to enforce Beijing's mandate to quash dissent with more than 300 arrests-including nine under a new national-security law.

With an extensive show of force on Wednesday, officers in riot gear confronted demonstrators who gathered around lunchtime in a busy shopping district and later spread to other areas. Police fired pepper spray and water cannon and hoisted purple banners warning protesters that they could be in violation of the new law.

Some activists sought to test the new law by holding signs calling for the city's independence from China, an act criminalized in Hong Kong under the law, which took effect late Tuesday. Police said they arrested nine people for violations of the security law, including a man who held a Hong Kong independence flag and a woman who carried a pro-independence sign decorated with American and U.K. flags.

Western governments have criticized the law as an assault on Hong Kong's relative autonomy and people's freedoms. The European Union's foreign affairs chief said Wednesday that the bloc is concerned that the law risks undermining Hong Kong's independent judiciary and its rule of law.

Lawmakers in U.S. Congress on Tuesday introduced a bipartisan bill to give refugee status to Hong Kong residents at risk of persecution under the new law.

Chinese and Hong Kong officials said the law is necessary to restore order in the city and that it was within Beijing's authority to impose it. China's government has demonstrated enough political tolerance and recent unrest in the city has challenged its bottom line, Zhang Xiaoming, deputy director of the Chinese government's Hong Kong and Macau Affairs Office, told reporters in Beijing Wednesday.

"As Deng Xiaoping said, people in Hong Kong can still criticize the Communist Party of China after the handover. However, you cannot turn these into actions," he said.

July 1 marked the 23rd anniversary of Hong Kong's handover to China from the U.K. Historically, civic groups have used the date to stage demonstrations in favor of change in Hong Kong. More than half a million demonstrators took to the streets on July 1 last year to protest a since-withdrawn bill that would have allowed the extradition of suspects from Hong Kong to China.

Police rejected an application for a march this year, citing a ban on large gatherings because of the new coronavirus, as well as violence at past rallies.

Activists said they would defy the ban and march anyway. The number of protesters swelled through the afternoon, paralyzing traffic in some areas as they filled roads. Some set up roadblocks. Crowds of people swarmed through the city to escape police dragnets.

One 78-year-old woman said she was dismayed by the new law after fleeing to Hong Kong in the 1970s to escape Communist Party suppression during China's Cultural Revolution.

"But what we see today is this national security-law, which is much worse than what Mao Zedong did to us," she said. "We are not scared anymore at this age. We want to oppose the national-security law."

Among those arrested was Andrew Wan, a Democratic Party lawmaker, according to his assistant.

"You can see Hong Kong people coming out speaking bravely," said Ramon Yuen, a district councilor for the same party. "The law deprives the rights of Hong Kong people-media freedom, the freedom to protest."

In the Causeway Bay shopping district, hundreds of demonstrators gathered in front of a police blockade chanting independence slogans. One woman, holding a handwritten sign calling for Hong Kong independence and decorated with U.S. and British flags, rushed to confront the police and was quickly arrested.

Hong Kong police later showed off the sign in a tweet announcing their second arrest for violating the national-security law. One officer was stabbed in the arm making an arrest, the force said.

In a sign of how wide-reaching the new law may be, police issued a statement that noted some protesters were chanting, "Hong Kong independence, the only way out." The statement said such slogans are "suspected to be inciting or abetting others to commit secession" and may violate the new law.

Some Hong Kong residents were swept up in the action as police formed cordons around the Causeway Bay shopping district.

"I'm very angry," said Ricky Po, who was walking through the area with his daughter at the time, as police officers moved to stop activists taking down a nearby banner that supported the new law. The law "removes human rights, I can't have freedom of speech," he said.