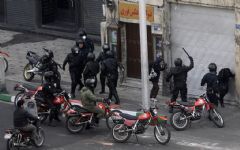 An Iranian being beaten

At least 12 people have been killed in four days of demonstrations in Iran, state media reported, in the biggest challenge to the authority of the Tehran regime since mass protests in 2009.

The violence continued despite an appeal for calm by Iranian president Hassan Rouhani on Sunday. He played down the significance of the protests on Monday, as the country's leadership struggled to respond to the largely spontaneous uprisings.

"Our great nation has witnessed a number of similar incidents in the past and has comfortably dealt with them. This is nothing," Rouhani said in a meeting with Iranian MPs on Monday. But he acknowledged that Iranians had legitimate concerns and had the right to make legal protests. The protests have stemmed from concerns about rising living costs and a stagnant economy, but have developed into a broader-based outcry against the regime.

They are the most serious challenge to Tehran's authority since the so-called Green Movement of 2009, when millions marched in the capital to protest the election of President Mahmoud Ahmadinejad, accused by the opposition of being rigged.

So far, the latest unrest is on a much smaller scale than 2009. Authorities have yet to launch a wide-ranging crackdown, as they did eight years ago, preferring instead to contain the protests locally.

Iran's state broadcaster said six people were killed in the small western town of Tuyserkan on Sunday, according to Agence France-Presse (AFP).

Also on Sunday, two were shot dead in the southwestern city of Izeh, the area's local member of parliament, Hedayatollah Khademi, told the semi-official ILNA news agency. Khademi said he did not know whether the shots were fired by security officials or protesters, according to the report.

Izeh is in the oil-rich southern province of Khuzestan, just south of the Lorestan province where two other Iranians were killed in protests on Saturday evening.

The deputy governor of Lorestan province, Habibollah Khojastehpour, denied that security forces had fired any bullets, blaming "Takfiri" groups and foreign intelligence services for the clashes.

Another two people were killed Sunday in the city of Dorud after a fire engine was hijacked, the semi-official ISNA news agency reported, citing the local governor.

At a meeting with MPs on Monday, Rouhani acknowledged that Iranians had the right to protest legally. "The space needs to open up for legal protest and criticism," he said, echoing remarks he made in a pre-recorded appeal for calm aired on state TV Sunday.

In a nod to the concerns fueling the protests, he added: "We have no bigger challenge than unemployment. Our economy requires major corrective surgery."

Earlier, state-run media outlet IRIB reported that officials had temporarily restricted access to social media apps Instagram and Telegram, which have been used by Iranians to share news about the protests. Iran's Minister for Communications and Technology Azari Jahromi denounced the reports as "rumors" in a post on Twitter Monday.

Social media has helped galvanize tens of thousands participating in the protests, which have taken place in towns and cities across Iran. The unrest appears to have begun with hardline agitators encouraging protests against Rouhani. But they quickly lost control of events and demonstrations have taken on a general anti-regime feel.

In a rare act of defiance, some protestors have even called for the resignation of Supreme Leader Ayatollah Khamenei.

In some demonstrations, women cast off their hijabs, defying the country's strict Islamic dress code. The protests have provided an opening for Iranian women to push for equal rights - something they've been fighting for over decades.

Video shared on social media captured Iranians chanting "We don't want an Islamic Republic" and "Death to the dictator." CNN has not independently verified the authenticity of the footage, purportedly shot in the western city of Khorramabad.

US President Donald Trump voiced his support for the demonstrations in a series of tweets on Sunday. He posted: "The people are finally getting wise as to how their money and wealth is being stolen and squandered on terrorism. Looks like they will not take it any longer. The USA is watching very closely for human rights violations!"

He weighed in again on Monday, posting: "Iran is failing at every level despite the terrible deal made with them by the Obama Administration. The great Iranian people have been repressed for many years. They are hungry for food & for freedom. Along with human rights, the wealth of Iran is being looted. TIME FOR CHANGE!

Rouhani, who won re-election in May, said in his Sunday speech that Trump had been at the root of many of Iranians' woes, "constantly creating problems" for people in the country since he entered the White House.