U.N. Inaction on Afghanistan
All Actions of the UN Human Rights System Critical of Specific States, 2014 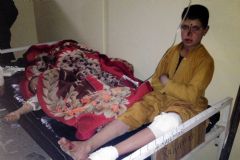 A suicide bomb attack hit a crowd attending a sports event in eastern Afghanistan on Sunday, killing dozens of spectators, according to Afghan officials.

Attaullah Fazly, the deputy governor of Paktika province, said that the attack took place at a volleyball tournament in the province's Yahyakhil district. Estimates of the death toll Sunday night ranged between 45 and 60. Abdul Mobin, a Paktika provincial council member, said 12 people died after being taken to the hospital.

"The number of casualties may go higher," Mr. Fazly said. "The injured are being taken to the provincial capital." He said helicopters were requested to fly some of the wounded to Kabul.

According to Mr. Fazly, the volleyball match was held in a playground and was attended by members of the Afghan Local Police, village self-defense units established with U.S. backing.

The Afghan Local Police-many of whom have been trained by U.S. special-operations troops-have been on the front lines of fighting against Taliban insurgents, often taking heavy casualties.

"I visited the hospital-55 wounded people were transferred to the provincial hospital from Yahyakhil," said Mr. Mobin. "Today was the final day of the tournament and the playground was very crowded."

Attacks of such magnitude are relatively rare in Afghanistan. Taliban suicide bombers routinely target government troops and installations, but haven't claimed credit for mass attacks on cultural and sporting events in the past.

In July, a suicide attacker set off a car bomb in a crowded market in Urgun, another district in Paktika. That attack claimed the lives of scores of people, and the government blamed the Taliban.

There was no immediate claim of responsibility for Sunday's attack. A Taliban spokesman didn't respond requests to comment.

The suicide bombing came a day after the White House outlined grounds for U.S. military action against the Taliban in Afghanistan after the end of this year. It authorized U.S. military forces to take action against Taliban militants under certain circumstances. The U.S. won't target Taliban members just because they are affiliated with the group. But Taliban members who threaten U.S. forces or are found to be working with al Qaeda could be targeted, the senior administration official said.

"While we will no longer target belligerents solely because they are members of the Taliban, to the extent that Taliban members directly threaten the United States and coalition forces in Afghanistan or provide direct support to al Qaeda, we will take appropriate measures to keep Americans safe," the official said.

The authorization spells out additional details of U.S. operations in Afghanistan in 2015, but a senior administration official said the move doesn't represent an expansion of the American mission.

A U.S. official said the new authorization would allow American airstrikes against Taliban militants that pose a threat to U.S. forces still there, as well as strikes in support of special-operations raids on al Qaeda targets and some Afghan security-force operations.

"An army that doesn't have an air force and artillery is army in name only," he said. Added Mr. Dostum: "I am not in favor of night raids conducted independently by foreign troops."

The U.S. official said the new authorization extends the status quo of authorized targets into next year. Mr. Obama's authorization doesn't appear to be a substantial expansion of the agreement the U.S. negotiated with the Afghan government. U.S. negotiators working with the Afghan government in 2013 and earlier this year to complete a bilateral security agreement pushed hard for the right of the U.S. military to take action inside Afghanistan to protect its forces.

Military and administration officials have been increasingly worried about the Afghan security forces' ability to hold off Taliban insurgents inside Afghanistan, worries fueled by watching the collapse of the Iraqi military inside Iraq.

Still, the small presence authorized by Mr. Obama to remain in 2015 may help provide support for the Afghan forces and ensure that their oversight doesn't get politicized, as it did in Iraq, officials said.

The new authorization could allow for U.S. special-operations forces to take a more direct role in helping the Afghan military if it begins to struggle in 2015.

But the administration official insisted the new authorization wasn't an expansion and the U.S. focus will be working "with the government of Afghanistan to achieve a peaceful and lasting settlement to the conflict."