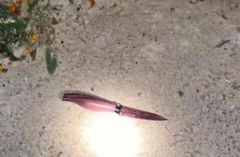 An attempted stabbing attack was reported at the Sde Ephraim farm on Monday after a Palestinian woman entered the farm and attempted to stab the wife of the owner, according to the IDF Spokesperson's Unit. The woman was stopped by local residents and no one was injured in the incident.

IDF soldiers arrived at the scene and are handling the incident.

The attempted attack comes a little over a month after a Palestinian attempted to infiltrate into the Sde Ephraim farm during the night, but was stopped by a guard without causing any injuries.

On Sunday night, the IDF thwarted an attempted stabbing attack in the Palestinian town of Tubas in the West Bank, north of Nablus, according to the IDF Spokesperson's Unit.