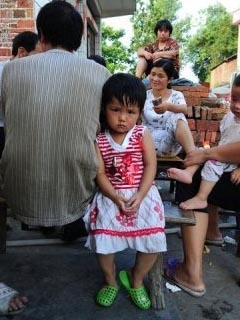 Population-planning officials embarked on a 20-day campaign to complete a quota of 9,559 sterilizations, by consent or by force.
Source: AFP

Authorities in Puning, a county in southern Guangdong province, detained 1,377 people this month. Their crime? They were the parents or other relatives of citizens who had violated the hated one-child policy.

Population-planning officials embarked on a 20-day campaign to complete a quota of 9,559 sterilizations, by consent or by force. So doctors have been working almost around the clock to meet goals.

Yet the physicians cannot do their job until one-child violators--considered population criminals--show up. The Puning authorities have tried various techniques to round up the unwilling. They have, for instance, denied building permits to parents with too many children, and they have refused to register births, which under the Chinese system results in the denial of education and health care for the "illegal" children.

Yet the most effective technique has been the indefinite detention of relatives. "It's not uncommon for family planning authorities to adopt some tough tactics," an official with the Puning Population and Family Planning Bureau said to Global Times, a state publication. Coerced sterilization, however, is not the roughest tactic the state employs. One-child officials have, across China, resorted to forced abortions and the killing of babies just seconds old. Murder may not be state policy, but the practice is widespread, well-known and condoned. Beijing's leaders know or should know what is being done. In the top-down, unitary state they run, they are, in a real sense, responsible for the abhorrent acts committed to enforce their population decrees and laws.

Those decrees and laws are extremely unpopular--undoubtedly the most loathed in China--and make almost no sense. True, birth rates were too high in the early days of the People's Republic. Mao Zedong generally believed there should be as many Chinese in the world as possible. The pro-growth attitude meant that at one point (1970) there were 5.9 births per female. The rate, of course, was unsustainable, and Beijing's technocrats adopted a mostly voluntary "late, long, few" program to limit population growth.

The population program worked: Birth rates plummeted. Yet Mao's successor, Deng Xiaoping, instituted the one-child policy in 1979 as one of his first initiatives after assuming power. During the existence of the coercive program China's birth rate declined from 2.9 births per female to around 1.6 or 1.7 today, figures well below the replacement rate of 2.1.

Chinese leaders these days congratulate themselves for the success of this much-criticized policy, which they credit for preventing up to 300 million births. Yet the program, which remains in effect, has inevitably created demographic abnormalities that cannot be remedied for decades. As Nicholas Eberstadt of the American Enterprise Institute writes in the Far Eastern Economic Review, "These problems will compromise economic development, strain social harmony and place the traditional Chinese family structure under severe pressure; in fact, they could shake Chinese civilization to its very foundations."

And what are these foundation-shaking problems? As an initial matter, the policy, in a society that places great importance on producing male heirs, has resulted in the world's most abnormal sex ratios. The 2005 "mini-census" reported that the sex ratio at birth, expressed as the number of boys per 100 girls, was 119--when the global average was somewhere between 103 to 106. Some provinces had ratios exceeding 130. The ratio for second children may be as high as 146. In the under-20 age group, there are 32 million excess males in China today, and this imbalance, partially the product of "gendercide," has already resulted in increased prostitution, elevated HIV-infection rates and renewed trafficking in females. The Chinese demand for females is so great that they are being abducted in North Korea, Burma and Vietnam and transported to China.

At this point we don't fully understand the other implications of the skewed ratio. As Eberstadt notes, "The country's gender balance has headed off in an eerie and utterly unfamiliar direction." The absence of historical parallels has naturally given rise to many theories regarding China's future.

Yet now that demographic patterns are set, we know the working age population will level off in three years. Total population will start falling about 10 years after that, maybe 15. By 2030 at the latest, India, not China, will be the world's most populous state.

It's unlikely the consequences of rapid population decline will be good for the Chinese state. The economy will, in all probability, shrink. The country's finances will be strained as the government struggles to care for the growing ranks of the elderly. The nation's ambitions will eventually narrow. The abnormal sex ratio will create societal tensions difficult to resolve. As virtually every Chinese demographer will tell you in private, the one-child policy has long outlived its usefulness.

Beijing will keep the policy in place, however. Why? The country's already shaky one-party state is unwilling to give up the control that the population-planning apparatus makes possible. A state that maintains the ability to sterilize wayward parents in Puning can do just about anything it wants.

As long as the Communist Party enforces the policy, it is essentially guaranteeing the decline of China. Even if the state changes course now--unlikely--the demographic dividends will not be evident for at least two decades, perhaps longer.

So is this China's century? The one-child policy, by itself, ensures the answer is "no."