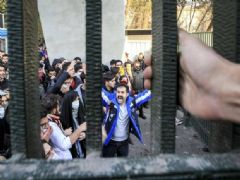 University students at an anti-government protest inside Tehran University

After six days of anti-government protests that have caught Islamic Republic authorities off-guard, a series of pro-regime (and regime-staged) demonstrations took place around Iran on Wednesday, while the arrests of hundreds of anti-regime protesters continued.

The country's top reformist politician, former President Mohammad Khatami, angered many when he presided over a meeting held by the reform-oriented Assembly of Militant Clerics. During the meeting, there was strong language condemning the anti-government protesters.

The country's police chief, Hossein Ashtari, claimed in a speech to his forces that 70 percent of the protests' organizers have been arrested, although he stopped short of giving a specific number.

According to IranWire reports and analysis and statements issued by governors and security officials in several provinces, more than 1,000 people have been arrested since the protests began on Dec. 28.

In the province of Tehran, more than 450 people had been arrested by Tuesday, said Ali Asghar Naserbakht, the province's deputy governor-general. Officials in the province's Malard County also said they arrested the "admin of a social-media page that was creating rumors"-revealing the true nature of some of the arrests. This is one of many cases in which officials have boasted about tracking people's digital footprints and arresting them solely on the basis of their posts on social media.

In Karaj, a large suburb of Tehran, more than 20 people have been arrested.

In the holy city of Mashhad, where the protests began, the deputy prosecutor said 138 people had been arrested. In the central province of Isfahan, which was the epicenter of the protests on Jan. 1, more than 100 people were arrested in different cities. Authorities had also arrested more than 100 in Markazi province, which includes the major city of Arak.

The northern province of Golestan, on the shore of the Caspian, has also seen many arrests. According to its governor-general, 150 people were arrested for chanting slogans against the regime and for "disrupting the public order and security."

Officials in the provinces of Qom, Kermanshah, Mazandaran, Kerman, Zanjan, Ardabil, Lorestan, and North Khorasan separately made claims about widespread arrests in their provinces.

Arrest of a European, TV Confessions, and 1,200 Blue Blindfolds

In the Lorestan city of Borujerd, a local official made international news by claiming to have arrested "a European citizen."

"This person was leading and directing the chaos and had been trained for this by espionage organizations in Europe and had come to Borujerd to run the riots," Hamidreza Bolhasani, Borujerd's judiciary chief, claimed in interviews with local media. Other officials noted that the arrested suspect is originally from Borujerd but has been naturalized as a citizen of a European country.

Ali Sabzevari, the Lorestan judiciary's head of public relations, said the suspect had been arrested "while carrying a camera and other equipment."

At Tehran's notorious Evin Prison, according to the Human Rights Activists News Agency (HRANA), a workshop inside has been ordered to stop making uniforms. Workers there have instead been instructed to make 1,200 blue blindfolds. It is likely that these blindfolds are being prepared for the new detainees.

IranWire spoke to an inmate serving a sentence for financial misconduct who is held at the prison's Ward 7. He described what it was like.

"I was awakened early in the morning by the noises of prisoners' traffic," he said. "They were emptying one of the rooms in the middle of Ward 7, mostly occupied by financial offenders."

The inmate said that all leaves of absence for both political and ordinary prisoners have been revoked until further notice. "We are keenly following the news and we are very worried," he said. "We don't receive many newspapers and the TV reports the news in dribs and drabs-but one can get an idea about what is happening outside by the unusual situation inside the prison."

Scraped Off the Streets

According to the inmate we spoke to, a number of new detainees who are considered to be "clean" and have no record of political or security arrests - those who, as prisoners say, have been "scraped off" the streets - have been sent to the "isolation ward," where they have no contact with other prisoners. The rest of the prisoners, the ones the government considers to be more dangerous or who have records of being arrested for political activities, have been sent to Ward 2A, controlled by the Revolutionary Guards, and Ward 209, run by the intelligence ministry.

"Teams have been dispatched to the prison and are separating out those [who] have been arrested in the events of recent days," Mostafa Mohebbi, director general of Tehran province's prisons, told Fars News Agency. "The number of arrests was not so high as to create a problem for us in receiving them." He added that the number of people arrested over the last four days was less than 200.

At the same time, the intelligence ministry's public-relations office announced that a number of "hostile elements and rioters" had been arrested-and that the search for others continues. This announcement indicates that there will be more arrests in the coming days.

As the protests continue, authorities have kept up their harassment of civil society. As previously reported, a number of student-activists have been arrested in the capital, and followers of the minority Sufi religious order the Gonabadi Dervishes have also born the brunt. Adding to the previous arrests, Mehdi Azadbakht, a webmaster for the dervishes' website Majzooban-e Noor, reportedly was arrested in Arak by intelligence ministry forces.

On Jan. 3, Iranian state TV broadcast the confessions of some of those arrested. Iran is notorious for broadcasting torture-induced confessions on its official outlets.

Run by the country's hardliners, the state broadcaster is blamed-even by many establishment figures-for adding insult to injury by not reflecting people's grievances. In his remarks on the protests, President Hassan Rouhani chided the broadcaster for not genuinely reflecting all sections of Iranian society.

Iranians abroad have organized an active network of human-rights organizations to respond to the events of the last week, and to report on arrests. Monitoring the fate of more than 1,000 incarcerated citizens is a heavy responsibility they now face.