U.N. Inaction on Myanmar
All Actions of the UN Human Rights System Critical of Specific States, 2009 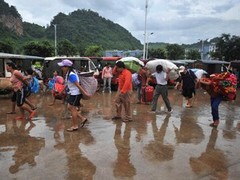 In this photo taken on Tuesday, Aug. 25, 2009, refugees fleeing from Kokang in Myanmar arrive at the Chinese border town of Nansan in southern China's Yunnan province. Thousands of people have fled from northern Myanmar into China to escape fighting between a local militia, government troops and a breakaway faction, and are taking shelter in an uncompleted housing complex, area residents said Friday, Aug. 28.
Source: AP

It has been a good few weeks for Burma's dictator, Senior Gen. Than Shwe, even though Sen. Jim Webb secured the release of an imprisoned American during his recent visit and even though the sentencing of Burma's democracy leader, Aung San Suu Kyi, after this summer's sham trial was roundly condemned. With all the media attention, Than Shwe got a dose of what he appears to crave most: international legitimacy. And he is assured that Suu Kyi, who won Burma's last free elections in 1990, will remain under house arrest during the 2010 elections. Last month Burma's state-run media even hailed the regime for its humanitarian nature and called for targeted economic sanctions to be lifted.

But is there, in fact, a more humanitarian regime in Burma?

Distinctly negative answers come from Ho Lom village in Burma's Shan State, where junta soldiers burned 62 houses on July 29. Or from Tard Mawk, in the same district, where soldiers burned more than 100 homes. Or from the 38 other Shan villages from which villagers have been forcibly displaced in July and August, part of a systematic and brutal campaign documented by the Shan Human Rights Foundation and the Shan Women's Action Network and reported by Human Rights Watch last month. Eric Schwartz, assistant secretary of the U.S. Bureau of Population, Refugees and Migration, noted on Aug. 19: "We've been deeply concerned by very recent reports of large-scale displacement, perhaps as many or more than 10,000 civilians . . . as a result of increased military activity in northeastern Burma."

Schwartz said this even before the latest round of attacks -- against the people of Kokang, an ethnic enclave of Chinese speakers in northeastern Shan State, close to the Chinese border. The U.N. High Commissioner for Refugees estimates that the fighting has driven 10,000 to 30,000 Kokang into China -- prompting a rare rebuke from the People's Republic, a longtime trade and investment partner of the junta.

Other ethnic groups, including the Karen in eastern Burma, have faced intensified fighting and egregious rights violations this summer. Some 5,000 Karen have fled into Thailand, according to Human Rights Watch. In Karen State, large numbers of land-mine injuries are being reported as untrained new conscripts, including children, are forced to fight their own people in some of the world's most heavily mined jungles.

These systematic campaigns in Burma's eastern ethnic regions have been marked by allegations of torture, extrajudicial executions and rapes of ethnic minority women and girls. Such mass atrocities are not new. Our collaborative team of medics conducted population-based health and human rights assessments in 2006-07 among more than 2,900 ethnic households in eastern Burma. We found that more than a quarter of all Shan families had been forcibly relocated in the previous year, that in 24 percent at least one family member had been taken by soldiers for forced labor and that in 9 percent of households at least one family member had been injured by a land mine -- one of the highest rates ever documented.

The current assaults appear to be part of the junta's strategy for the 2010 elections. The generals are attempting to force their ethnic opponents to become border patrol forces and to participate in their showcase elections. Most of the larger ethnic groups and political parties have rejected these offers, as did the leaders of Kokang. Most, along with Suu Kyi's National League for Democracy, have also rejected the junta's constitution, which was drafted without their input and approved in the discredited referendum of May 2008.

Burma's ethnic peoples know they are not living under a new, more humanitarian regime. Quite the opposite: The junta is creating humanitarian emergencies in its quest for control. Shan, Karen, Kokang and other civilians are losing their homes, livelihoods and lives. Their suffering is directly linked to the detention of Suu Kyi and to the crackdown against Burma's democratic forces: student leaders, journalists, independent humanitarian relief workers and courageous clergy of all faiths. Indeed, essentially all the progressive forces opposing the generals are under attack.

Strikingly little international attention has been paid to this murderous turn of events. Yet these ethnic peoples must play a role if Burma is to have any sort of decent future. Suu Kyi knows this; in the only statement her people have had from her in years, given to U.N. Special Envoy Ibrahim Gambari in late 2007, she highlighted the need for ethnic participation for true national reconciliation. The Obama administration, which is reviewing its Burma policy, would do well to heed Suu Kyi's advice: Don't forget Burma's ethnic groups. Whatever the administration does about sanctions, it must do much more to press the junta, Burma's neighbors and the junta's supporters to stop the campaign of bloodshed against Burma's ethnic peoples. China has a special role to play, first in providing humanitarian relief to those seeking refuge across its borders and in pressuring the junta to end its brutal campaign. Ethnic warfare and its resultant instability are in no one's interest, except perhaps Than Shwe's. He must not be allowed to continue killing with impunity.