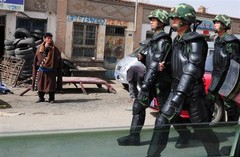 A court in northwest China has sentenced eight Tibetans to jail terms ranging up to seven years for involvement in unrest earlier this year, an overseas Tibetan rights group said.

The group, which included six monks, was sentenced on Thursday at a court in Machen county in Qinghai province, the Tibetan Centre for Human Rights and Democracy reported in a statement.

They were found guilty of inciting demonstrations against the Chinese government in the ethnic Tibetan town of Rabgya in March, according to the group based in Dharamshala, India -- home of the Tibetan government-in-exile.

A mob attacked the police station in Rabgya, triggering a massive security clampdown.

According to the Tibetan rights group, the unrest broke out after a monk drowned when he tried to escape from police detention by jumping into a river.

A court official denied any knowledge of the trial when contacted by AFP on Tuesday.

"We don't know anything about the trial. Nobody at our court knows," she said.

China has ruled Tibet since 1951, after sending in troops to "liberate" the Himalayan region the previous year, and Beijing has long maintained that its rule ended a Buddhist theocracy that enslaved all but the religious elite.

The worst unrest in Tibet in years erupted in the regional capital Lhasa in March 2008, quickly spreading to other Tibetan-inhabited areas of China.

China has said "rioters" were responsible for 21 deaths, while saying that its security forces killed only one "insurgent."

However, the exiled Tibetan government has said more than 200 Tibetans were killed in China's subsequent crackdown.