U.N. Inaction on China
All Actions of the UN Human Rights System Critical of Specific States, 2008 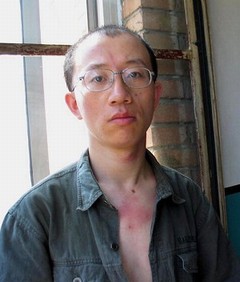 "Leading Chinese AIDS and democracy activist Hu Jia under house arrest at his home in Beijing 01 June 2004. Hu is regularly arrested on politically sensitive anniversaries; this marks the first time that authorities do not admit that he is in custody. The red marks on his throat and chest are from abuse by the authorities."
Source: AFP/Getty Images

"China's arrest of a prominent rights campaigner is part of an increasing crackdown on critics that breaks promises it made to land the Olympics, said activists who called for world pressure on Beijing.

The arrest of Hu Jia, who was taken from his Beijing home on December 27, is the latest example of efforts by China's communist rulers to intimidate critics so that voices of dissent are not heard during the August Games, they said.

"Within the last two weeks... the police have began detaining and putting under house arrest dozens of activists, outspoken intellectuals and human rights lawyers," the China Human Rights Defenders, a network of domestic and foreign activists, said in a report released on the weekend.

"Restrictions of movement, harassment and incarceration of activists is likely to intensify and expand in scope as the Olympics approaches."

Hu, 34, who gathered and distributed information on government rights abuses, was the biggest recent target for authorities, said activists.

They said he was arrested while Western attention was diverted by the Christmas holidays, and that his charge of "inciting subversion of state power" could result in several years in jail.

"It's a warning. By striking one, you create fear in 100 others," said Sun Wenguang, a retired Shandong University professor and outspoken critic of the rights record of China's communist authorities.

"The government is trying to create a climate of fear to ensure a 'clean' Olympics," he told AFP.

In 2001, China promised that if it won the right to host the Games, "tremendous" human rights improvements would ensue, a pledge repeated in October by Liu Jingmin, Beijing's vice-mayor and a top Games organiser.

But activists said China will continue trampling rights before the Olympics -- which it sees as a chance to trumpet the country's stunning economic rebirth -- unless the world speaks up.

"We call on free countries, international human rights organisations, and world public opinion to... press China's government to reinstate respect for human rights, scrupulously abide by the law and fulfill the promises it made," read a petition signed by 57 prominent activists in response to Hu's arrest.

The petition, released on Monday, demanded Hu's release and that authorities allow him access to a lawyer and medication he requires for a liver complaint.

Associates say Hu is in a Beijing detention centre but that no one has been allowed to see him. His wife, fellow activist Zeng Jinyan, is believed to be under house arrest at home with their baby daughter.

Retired professor Sun said China is probably testing the international community's reaction to its moves, and may be emboldened to crack down further if there is none.

"The government will watch to see what it stirs up. If there are strong protests, they may think twice and loosen up a bit," he said.

In 1993, as it awaited the bid decision for the 2000 Games that eventually went to Sydney, China released prominent dissident Wei Jingsheng in a move slammed by many as a cynical bid to influence the decision.

"These are not the actions of a normal government, but it has happened here before," Bao told AFP.

China denied Tuesday it was breaking its Olympic vows and hit out at the activists.

"Some organisations and individuals take the Olympics as an opportunity to play up some topics to vilify China. We are resolutely opposed to that because it violates the spirit of the Olympic Games and will go nowhere," foreign ministry spokeswoman Jiang Yu said when asked about the charge."