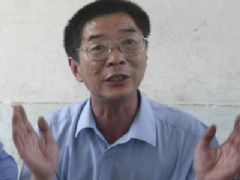 A Beijing man who supplied information to a dissident-run U.S.-based news website has been detained on charges he made up stories that disparaged the Chinese government, police announced Tuesday.

Xiang Nanfu was accused of providing false stories to Boxun.com of organ harvesting and live burials by the Chinese government, according to a police statement. It said Xiang worked with Boxun.com to incite public dissatisfaction against the government.

Boxun.com, founded in 2000 and based in New York City, is known for publicizing allegations of high-level Chinese corruption and human rights abuses. Access to the site is blocked in China.

Xiang, 62, was detained under a law against troublemaking, according to the police statement. Violators usually are punished with fines, but the law also allows a prison sentence of up to five years.

"I have made up things that are not facts," said Xiang, who was shown wearing the green vest of a jail inmate. "My behavior has had a very bad impact. I realize that I have smeared the ruling party and the government."

The founder of Boxun.com, Watson Meng, denied the site had reported that organ harvesting or live burials occurred. But he said an April report described petitioners who made such allegations in front of the Beijing office of the United Nations.

"The authorities could have used some means to extort the public confession, although we do not know what means they have used," Meng said by phone from New York.

Meng said that Xiang had backed up his reports with photos and video footage and called him trustworthy. He said most were about people who petitioned the government over complaints about mistreatment by authorities.

Meng rejected an allegation by police that Boxun paid Xiang "large amounts of U.S. dollars" for his reports.

"In the past three years, Boxun did not pay him directly, and he never sought payments from us, either," Meng said.

The website asks readers to support its contributors by donating sums ranging from $5 to $100 directly to the reporters and writers.

Meng said Xiang and other Boxun contributors have been harassed by police in the past.

"(Xiang) has insisted on exercising his rights to freedom of speech and freedom of press as granted by the constitution, and that's respectable," said a statement issued by Boxun. "We will provide assistance to Mr. Xiang Nanfu to our best ability."

Another veteran activist, Huang Qi, said authorities regularly investigate his website, which documents efforts of petitioners and the government's response.

Huang said volunteers who contribute to his site, 64Tianwang.com, also have been investigated. The site is blocked in China.

In March, authorities detained several people who reported for Huang's website about a self-immolation protest on Tiananmen Square in central Beijing during the annual meeting of China's ceremonial legislature. Huang said most of those detained have been released.

"We condemn all forms of illegal suppression of freedom of the press and citizen journalists," Huang said by phone. "We also demand the immediate and unconditional release of all citizen journalists in the Chinese mainland, including one of our volunteers."