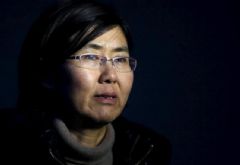 Human rights lawyer Wang Yu talks during an interview with Reuters in Beijing in this March 1, 2014 photo. (Reuters/Kim Kyung-Hoon)

China Has Arrested a Group of Lawyers Already Being Secretly Detained

China formally arrested several Chinese human rights lawyers on suspicion of subverting state power after months of secret detention, one of their colleagues said on Tuesday, the latest move by authorities to crack down on dissent.

President Xi Jinping's administration has tightened control over almost every aspect of civil society since 2012, citing the need to buttress national security and stability.

As many as 38 lawyers and activists associated with the Beijing Fengrui law firm have been swept up in the crackdown and held since July under a procedure which allows for six months of secret detention, Human Rights Watch has said.

The firm has represented several high profile clients, such as the ethnic Uighur dissident Ilham Tohti. State media has accused the firm and its associates of orchestrating protests outside courts and politicizing ordinary legal cases in order to attract international attention.

Zhou Shifeng, the firm's director, was among those whose families were notified by police in the northern city of Tianjin on Tuesday of their January 8 arrest, his colleague Liu Xiaoyuan said.

The families of Wang Quanzhang and Li Shuyun, a lawyer and apprentice lawyer at the firm, were also notified of their arrests on the same charges, Liu said, which carry possible life sentences in severe cases.

"For the crime to become as serious as state subversion, it's a completely political charge," Liu said.

Several other people from separate firms, including Zhao Wei, an assistant for the prominent detained lawyer Li Heping, were also arrested for state subversion or inciting state subversion, Liu said.

From July through September, authorities detained or questioned about 300 hundred human rights lawyers and activists, rights groups have said, in the government's most severe clampdown on dissent in two decades.

China consistently rejects any criticism of its human rights record, saying it adheres to the rule of law.

Nonetheless, the crackdown has alarmed Western governments. US Ambassador to China Max Baucus has called on China to recognize several detained rights lawyers as "partners, not enemies of the government".

Chinese authorities have also detained a Swedish national who worked on legal aid and rule of law, a person with direct knowledge of the matter said.