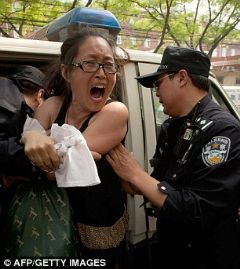 Chinese police have detained supporters of Chen Guangcheng at the hospital where the blind activist is being treated, and have beaten two of them, the backers and their relatives said Friday. Crowds of friends and well-wishers have gathered outside the central Beijing hospital where Chen is being treated for an injury sustained during his flight from house arrest last month. The wife of one, rights lawyer Jiang Tianyong, told AFP he was detained at the hospital Thursday evening by Chinese police who beat him and warned him against supporting Chen, before releasing him early Friday.

"They beat him on his ears," Jiang's wife Jin Bianling, told AFP. "He is now deaf in one ear and can barely hear out of the other ear."

Police released Jiang early Friday, but have been stationed at the couple's home ever since, effectively placing him under house arrest, she said, adding they also destroyed Jiang's mobile phone.

Artist and rights defender Liu Yi told AFP that police also grabbed him outside the hospital on Thursday, beat him over the head with a bottle and took him into custody for interrogation. "Three or four policemen grabbed me and took me inside a nearby courtyard and one of them beat me over the head, striking me about 10 times," Liu, who was released Thursday evening, said. "I'm alright now, they hurt my leg and roughed me up pretty good and warned me to stay away from the hospital."

Another supporter, Du Yanling, said he was questioned by police after he left the hospital and warned against speaking out against Chen's treatment.

"They didn't beat me, they only checked my papers and questioned me," Du told AFP. "I saw several other (Chen supporters) being detained, but I don't know how many were taken into custody." Chen, a self-taught lawyer who has been blind since childhood, served four years in jail after becoming a thorn in the side of authorities in his home province of Shandong in eastern China, highlighting abuses including forced sterilisation and late abortions.

He was placed under unofficial house arrest after being released from prison in 2010, and escaped house arrest on April 22. Since then, several of his supporters and relatives have been detained, among them his brother and He Peirong, the activist who helped him flee.

His flight to the US embassy has been a major embarrassment for the Chinese government, particularly with US Secretary of State Hillary Clinton in Beijing for high-level talks. Chen has been in the hospital since leaving the US Embassy on Wednesday.

On Thursday, he made a dramatic telephone appeal to US lawmakers from his hospital bed, saying he feared for his family's safety in China.

His case has become a major headache for the US government, with Beijing demanding an apology for what it called "interference" in its internal affairs, and American opposition politicians criticising Chen's treatment