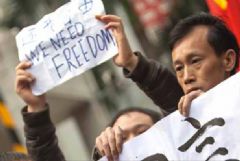 Chinese police raided a high-profile nongovernmental organization this week, taking its computers and financial documents, the group said, the latest action in a growing government crackdown on dissent.

About 20 men dressed in police uniforms and claiming to be representatives of a Beijing police bureau barged into the offices of the Beijing Yirenping Center early Tuesday morning, members of the anti-discrimination group said.

The police also temporarily detained a Yirenping employee, said the organization, which focuses on eliminating discrimination against disadvantaged groups such as women, carriers of hepatitis B and HIV, and people with disabilities.

For more than two weeks, the Yirenping Center has been campaigning for the release of five women's rights advocates, whose arrests just ahead of International Women's Day prompted worldwide condemnation.

This week's raid appears to be retaliation for spotlighting the plight of the five women, said Yirenping co-founder Lu Jun. Details of the raid were made public late Wednesday and early Thursday by the organization.

The raid took place the same day an International Olympic Committee panel arrived in Beijing to begin a five-day inspection of the city's bid to host the 2022 Winter Olympics. The convergence of these two events was noted by human rights groups as the latest sign that the Chinese government intends to ignore international concerns and specific stipulations laid out by Olympic organizers.

When Beijing was chosen to host the 2008 Olympics, many had hoped that it would help improve the government's human rights record. But the oppression of activists and harassment of NGOs has only worsened, rights groups say.

During the past two years, since President Xi Jinping's rise to power, China has carried out a fierce crackdown on dissent, covering civil society groups, bloggers and even academics. Many human rights and advocacy groups, both abroad and within China, have called it the worst clampdown since the period after government troops opened fire on Tiananmen Square protesters in 1989.

The five women's rights advocates for whom Yirenping had been campaigning were arrested earlier this month while planning to hand out leaflets on International Women's Day, March 8, to raise awareness against sexual harassment on public transportation. Since then, thousands of rights advocates globally have signed petitions demanding their release. Some Chinese universities have tried to bar students from showing support for the five women.

British and European Union diplomats have also called for the women's release. Last Friday, U.S. Ambassador to the United Nations Samantha Power said, "If China is committed to advancing the rights of women, then it should be working to address the issues raised by these women's rights activists - not silencing them."

When asked about the arrested women, Chinese Foreign Ministry spokeswoman Hua Chunying said, "No one has the right to ask China to release relevant persons, so we hope that relevant people will stop interfering in China's judicial sovereignty in such a manner."

According to their attorneys, the women have spent the past few days under repeated interrogation and have been asked to "admit their mistakes." Wu Rongrong, one of the women, has hepatitis B and was denied medication for more than a week before she was transferred to the medical facility at the detention center where she is being held, her attorney said.