U.N. Inaction on China
All Actions of the UN Human Rights System Critical of Specific States, 2013 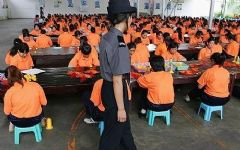 A Chinese woman sent to labour camp after demanding her daughter's rapists be punished lost her compensation case Friday, state media said, as gruesome details emerged of inmate abuses from electricity to suspension.

People can be sentenced to up to four years of "re-education" by a panel without judicial review, and critics say the system is open to rampant abuse by officials seeking to lock up those who complain.

Tang was condemned to 18 months in a camp for repeatedly protesting for justice after seven men in 2006 kidnapped, raped and forced her then 11-year-old daughter into prostitution.

She served eight days before the public outcry saw her released, and she sued the local body that oversees labour camp punishments in Yongzhou demanding 1,463.85 yuan ($240) for the loss of her personal freedom.

But "a court in central China's Hunan province on Friday rejected the compensation demand," Xinhua news agency reported. Officials at the Yongzhou Intermediate People's Court declined to comment to AFP.  Tang said that she would file an appeal, according to Xinhua.

The decision came days after Chinese magazine Lens detailed abuses at a women's labour camp, in a rare domestic media account of unsavoury detention practises.  Detainees described being hit with electric prods on the face, hung by the arms, shackled to a seat bent forward and tightly chained half-naked to a bed for days at a time.

One victim recounted being forced to sit on the "tiger stool" with her hands and feet cuffed to hold her in a painful position for hours, the shackles tightening the more she moved.   Another detainee said she suffered electric shocks to her face, neck and body for 20 minutes at a time until she bled, and was handcuffed, beaten and chained to a door. She was forced to relieve herself on the spot.

The report was no longer accessible on the magazine's own website Friday, and copies could not be read on China's closely censored Internet.

A 2009 United Nations report estimated that 190,000 Chinese were locked up in such facilities, which were first set up in the 1950s, although officials have said the total is 60,000. Many inmates are petty criminals and drug addicts.

Meng Jianzhu, one of 25 members of the country's powerful Politburo who oversees politics and legal affairs, was quoted in January as saying the system would be abolished this year, but the reports quickly disappeared.

No firm announcements of reform materialised at China's annual national parliamentary session last month as some had anticipated, with Premier Li Keqiang saying at its close that changes could be revealed later this year.

The seven men who had kidnapped Tang's daughter were convicted last June, with two condemned to death, four given life sentences and one jailed for 15 years.

Tang then sought harsher punishment for the accused and two months later was detained herself.  She was sentenced for "seriously disturbing social order and exerting a negative impact on society", Xinhua added.

The news agency, along with state broadcaster China Central Television (CCTV) were the only media allowed into the court on Friday, according to online reports.