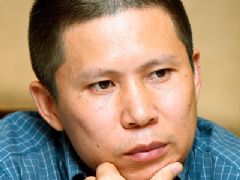 BEIJING -- Legal advocate Xu Zhiyong was sentenced Sunday morning to four years in prison after being convicted by a Beijing court of "gathering a crowd to disrupt public order."

The 40-year-old Xu is the most prominent Chinese activist to be sentenced to prison since the 2009 trial of Liu Xiaobo, who was subsequently awarded the Nobel Peace Prize.

"This destroys the last remaining dignity of the Chinese legal system," Xu told the court, according to his lawyer, Zhang Qingfang.

While stories of sentenced activists in China are familiar, the Xu case was particularly disheartening to human rights activists because of his attempts to work within the system. He embraced causes that Beijing ostensibly supports -- equal education for migrant workers and regulations requiring government officials to disclose their assets.

Xu earned his doctorate in law at prestigious Peking University and was elected to the local People's Congress, the representative assembly.

In 2009, he founded the New Citizens Movement, designed to push for rule of law, upholding the rights enshrined in the current Chinese constitution.

The indictment charged Xu with organizing a demonstration at the education ministry at which people "unfurled banners, made a racket, and defied and obstructed public security police officers from enforcing the law, creating serious chaos at that location."

"I am not surprised, but I am still disappointed. The trial was merely a formality, just for show. The verdict and sentence were predetermined," said Zhang, interviewed by mobile telephone from inside a police car. Zhang said he had been trying to give interviews outside the courthouse when he was forced into the car by police, who said they would give him a ride for his own protection.

After speaking a few minutes, Zhang said he had to hang up the telephone. Just before the call ended, he was heard quarreling with police, telling them, "No, I don't need your protection."