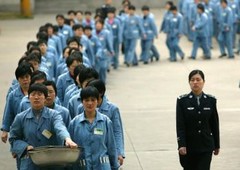 BEIJING (Reuters) - Chinese dissident Xie Changfa was sentenced to 13 years in jail for "subversion of state power," rights groups said on Wednesday in what they described as the most severe sentence of its kind in several years.

Xie, 57, who had tried to set up the China Democracy Party in southern Hunan province, was also convicted by the Changsha Municipal Intermediate Court on Tuesday of "soliciting and inciting others to attack, denigrate, and overturn state power and the socialist system," Human Rights in China said.

China's Communist Party, which will celebrate 60 years of rule over mainland China on October 1, does not tolerate any challenge to its rule.

Liu was detained in December for promoting a petition demanding political reform in China and an end to one-party rule. He was formally arrested in June for inciting subversion.

Xie was detained in June 2008, two months before Beijing hosted the Olympic Games as a showcase of China's modernization.

The China Democracy Party was founded in June 1998 when its founders, who had been active in the 1989 student protests on Beijing's Tiananmen Square, attempted to register it during then U.S. President Bill Clinton's visit to China.

The original founders were detained soon after and sentenced to more than 10 years imprisonment. Some have since been released into exile in the United States.