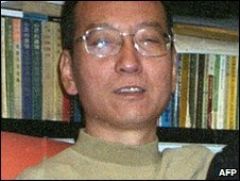 Liu Xiaobo is a veteran of the 1989 Tiananmen Square protests
(Source: BBC)

Leading Chinese dissident Liu Xiaobo has been jailed for 11 years for "inciting subversion of state power", after a trial condemned in the West.

The trial, from which Western diplomats and journalists were barred, followed Mr Liu's co-authorship of a document last year urging political reform.

Several people were apparently hurt at a Hong Kong protest over the sentence.

The human rights group Amnesty International condemned the sentence, saying freedom of speech was at stake.

The US also denounced the sentence. China has accused Washington and the EU of meddling in its affairs.

The BBC's Michael Bristow in Beijing says the sentence shows China does not want anyone to challenge its authority.

"All I can tell you now is 11 years," the defendant's wife, Liu Xia, told reporters. Diplomats said they were told by Mr Liu's lawyers that he had been deprived of his political rights for a further two years.

There was immediate US reaction to the sentencing.

"We continue to call on the government of China to release him immediately and to respect the rights of all Chinese citizens to peacefully express their political views in favour of universally recognised fundamental freedoms," said embassy official Gregory May at the courthouse.

Mr May was one of a dozen diplomats - from the US, Canada, Australia and several European countries - stopped by authorities from attending the trial and sentencing.

"Persecution of individuals for the peaceful expression of political views is inconsistent with internationally recognised norms of human rights," Mr May said.

Photographs taken outside China's Liaison Office in Hong Kong on Friday show three people being treated on the pavement for injuries.

The Associated Press, which released the images, said a security guard, a protester and a police officer had been hurt during a protest.

Mr Liu is a prominent government critic and veteran of the 1989 Tiananmen Square democracy protests.

A writer and former university professor, he has been in jail since 2008, after being arrested for writing a document known as Charter 08.

The charter called for greater freedoms and democratic reforms in China, including an end to Communist one-party rule.

Mr Liu is the only person to have been arrested for organising the Charter 08 appeal, but others who signed it have reportedly being harassed.

Amnesty International said it condemned the sentence imposed on Mr Liu and was "deeply concerned for other Charter 08 signatories and freedom of expression in China".

"Liu Xiaobo's detention and trial show that the Chinese government will not tolerate Chinese citizens participating in discussions about their own form of government," said Sam Zarifi, director of Amnesty's Asia-Pacific Programme.

In earlier interviews with the BBC, co-signatories of the Charter said they were ready to be punished alongside Mr Liu - not to admit they had done anything wrong, but to stress their ideas were the same.

Abolishing the law on inciting to subvert state power is among the reforms advocated in Charter 08. "We should end the practice of viewing words as crimes," the petition says.

"[Mr Liu] has worked to try to find a way to allow the ordinary citizen to criticise the government or to make proposals to the government, on how the people can participate in government," the head of the law firm defending him, Mo Shaoping, told AFP.

"We pleaded not guilty - his crime is a crime of speech," he said.

More than 300 international writers including Salman Rushdie, Umberto Eco and Margaret Atwood have called for Liu's release, saying he should be allowed to express his opinion.