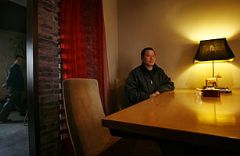 Gemunu Amarasinghe / AP
A waiter peeps in as Gao Zhisheng, a human rights lawyer, meets with reporters at a tea house in Beijing on April 7, 2010

After reappearing in late March in Beijing, a Chinese human rights lawyer has vanished once again, raising fears that he has returned to a secret detention at the hands of Chinese state security officers. It is the latest twist in the saga of Gao Zhisheng, a leading attorney who fell afoul of Chinese authorities for taking on sensitive cases and has spent much of the past five years in detention or under surveillance.

In mid-April Gao flew to the city of Urumqi in western China, where he met with his father-in-law, according to interviews with his friends and supporters. He was supposed to fly back to the capital on April 20, but he has not been heard from since. "Gao called his father-in-law shortly before his flight was scheduled to take off, telling him that he'd call back as soon as he got to Beijing, but that call was never received," says Li Heping, a lawyer. "No one knows what's happened to him, where he is, or whether he ever boarded that flight to Beijing on April 20. I've been to his Beijing apartment many times since his latest disappearance, but apparently nobody was there."

Bob Fu, a Texas-based minister who helped Gao's family flee China last year, believes Gao has returned to some form of detention. "His father-in-law said he stayed overnight at his home and was accompanied by four to five security agents," says Fu. Gao "said he would stay with them the next day in a hotel, but since then he disappeared. We don't know what has happened to him, but obviously he's in the hands of the security agents."

Gao's disappearance comes at an uncomfortable time for China. The Shanghai Expo kicked off on April 30. China wants to put on its best face for the six-month fair, which organizers hope will be the largest ever. And next week the U.S. and China will resume their bilateral human rights talks; Gao's ongoing case will likely be raised during the May 13-14 meeting in Washington.

He has been a leading lawyer and activist in China for a decade, taking on cases of religious repression, injured workers and illegal land confiscation. That work led to the Ministry of Justice naming him one of China's top 10 lawyers in 2001, but once he began pushing for the rights of followers of Falun Gong, a religious movement banned in China, he fell from favor. He was convicted of subversion in 2006 and sentenced to a suspended three-year jail term after he wrote a letter to China's leaders decrying the brutal treatment of Falun Gong practitioners. Gao was arrested by police in February 2009 and was not heard from for more than a year. The police said they had lost track of his whereabouts, and Foreign Ministry spokespeople gave conflicting accounts of what had happened to him. During a previous detention in 2007 Gao says he was brutally tortured and told he would be killed if he spoke about his treatment, which he did in an open letter. That raised concerns that he may have been abused or even killed. But in late March he spoke with family and colleagues by phone and said he was living at Wutai Mountain in Shanxi province. During an interview with the Associated Press in Beijing he said he wanted to be reunited with his family, who fled to the U.S. last year, and no longer had the strength to continue his legal work. The South China Morning Post reported that in a subsequent interview he was outspoken and seemed to contradict his earlier comments that he intended to abandon his human rights work.

Gao's supporters now fear that his brief reappearance may have been intended to stanch criticism of China's handling of the case. "Under enormous international pressure, the Chinese government was forced to make him resurface to prove that he's alive," says Fu. "The worry for the security forces is the more he is allowed to appear, the more information would be leaked about what happened to him over the last 400 days. That's the only explanation why he has been kept in secret again."