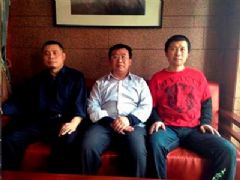 Chinese Lawyers Say They Were Tortured By Police

BEIJING (AP) - His head covered in a black hood, lawyer Tang Jitian recalls being taken into a room and hearing the sound of a rope being pulled. The handcuffs behind him were jerked upward and soon he was dangling in the air.

"I got hoisted with my head facing down, feet off the ground and butt in the air," Tang said in an interview with The Associated Press. "Five or six people were hitting me and kicking me. All I heard was 'thud, thud, thud,' throughout."

Tang is among a group of four Chinese rights lawyers who say they were tortured by police when they were rounded up in late March after protesting outside a detention center in Jiansanjiang, a farming community in northeastern China. They had joined several people shouting to demand information about relatives believed locked up inside because they were members of Falun Gong - banned as a cult though they claim to be a peaceful spiritual movement.

Three of the lawyers spoke to the AP about the abuse, and one of them provided hospital records showing bone fractures after being in police custody.

Their accounts raise doubts about commitments by Chinese authorities to curb the use of torture, establish rule of law and ensure due process for those accused of wrongdoing. Their experience is part of a broad crackdown over the past year on rights lawyers and other activists seeking to hold authorities accountable to the country's constitution and to their own stated goals of boosting fairness in Chinese society.

The detention center the lawyers were investigating is one of many informal jails nationwide officially known as "legal education centers" where an unknown number of people are believed detained without trial or access to lawyers. Activists say beatings and torture are common. They have existed since about 1999, first mainly to house and punish Falun Gong practitioners but over time also used for others deemed irritants by authorities.

The campaign by rights groups, including the four lawyers who say they were beaten, is aimed at pressuring the Chinese Communist Party to eliminate all forms of arbitrary detention, or so-called "black jails," after it made a high-profile pronouncement in November that it would end its much-maligned labor camp system.

"China's legal system is regressing," said Wang Jianxun, a legal scholar at the China University of Political Science and Law. "I have seen no sign of progress, but rather that the overall conditions are deteriorating."

Police declined to address the allegations of torture, or field any questions about the Jiansanjiang detention center. Regional police in Heilongjiang province said in a written statement that the lawyers were disturbing public order and that three of them were operating without a license.

Chinese police routinely use torture to coerce confessions and statements. In a little-known aspect of the Chinese system, the ruling party also uses physical and mental abuse in internal investigations to extract confessions from members suspected of corruption and other violations of party discipline, as detailed in recent interviews with the AP.

New York-based Human Rights Watch has urged Beijing to investigate the latest claims by lawyers, calling the abuse an "assault" against the legal profession.

The incident in Jiansanjiang, near the Russian border, has received much attention on social media but little coverage in China's state media. The nationalist newspaper Global Times published an editorial about it, acknowledging the legal ambiguity of the detention center there while also criticizing the rights lawyers for causing trouble.

"Instead of providing legal assistance through lawful means, they incite crowd gatherings and protests and thus become activists in illegal activities," the editorial said.

In recent years, rights lawyers have become a force for seeking stricter rule of law in China, but have been labeled a "mafia" with foreign connections by the party-run journal Seek Truth. "They have not only disturbed the social order, sabotaged the security and stability of public opinion, but also damaged the reputation of the legal profession and thwarted the legal progress," it said. "They are one of the malicious tumors in the Chinese society and should be paid serious attention to."

Tang, whose law license previously was revoked because of his activism, said he wanted to call attention to what he said was an illegal detention center when he agreed to seek meetings with detained Falun Gong practitioners at the request of their family members. Licensed lawyer Zhang Junjie said he had agreed to help Tang and that he was assigned to represent a woman who had been locked up in Jiansanjiang since last year without any legal due process.

The lawyers asked the local police to provide legal paperwork about people inside the facility on March 20, when about two dozen family members and friends showed up to demand the detainees be released.

"We were shouting, 'Stop the crime and release the people,'" Tang recalled.

The lawyers returned to their hotel that evening to prepare papers for the local prosecuting office. The next morning, men knocked open their hotel rooms and took them away, they said.

"Several men in plain clothes and two men in the uniform of police assistants dragged me out of the bathroom and demanded that I follow them with my luggage," Zhang said.

Zhang said he demanded the men to identify themselves and protested the use of force, but he was pushed onto an elevator and then into a white car with no police emblem.

Once inside a police station, a state security officer slapped him in the face several times and hit him in the head with a bottle of water, Zhang recalled. Then the officer and another man "kicked me onto the ground and beat me viciously for at least three hours," he said. Afterward, he could hardly sit up.

Wang told The Associated Press that he also was hooded, hung up and beaten. "I felt like I was beaten by a rod covered with some soft material, but I still feel the pain and have trouble sleeping at night," he said.

Zhang was released first. Ten days later, Wang and Tang were freed. The fourth lawyer, Jiang, could not be reached for comment, but had suffered a similar experience, according to Tang and a joint statement by the four lawyers.

When Wang returned to the city of his residence and office, Hangzhou, local authorities turned off his power and water and demanded that he leave the city. He has since returned to his hometown in central Hubei province.

The concerted actions targeting the lawyers suggest the campaign against them has tacit approval from high-ranking officials, said Beijing-based legal professor He Bing.

"It will be very dangerous if lawyers cannot properly practice their profession," he said.

Another rights lawyer, Chen Jiangang, said the incident in Jiansanjiang shows that Beijing's pledge to respect the rule of law is "all lies."

"This shows China still lives in the darkness of medieval times when there is no human rights, no rule of law and no democracy," Chen said.