U.N. Inaction on Zimbabwe
All Actions of the UN Human Rights System Critical of Specific States, 2010 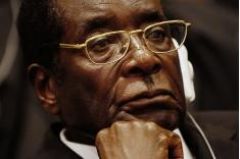 ”Corrective rape” against homosexuals on the rise in Zimbabwe

An annual report by the US State Department on the human rights situation in Zimbabwe has revealed that 'corrective rape' against gay men and lesbians is on the increase.

Journalist Angus Shaw said the latest 50 page report compiled by the US Embassy in Harare gives emphasis to the harassment of the gay community, including revelations that there is now a practice in Zimbabwe called 'corrective rape', where some homosexuals are being raped 'by those intending to convert their sexuality'.

Although persecution of gays and lesbians is on the increase, very few victims are prepared to speak publicly about the attacks because of the stigma surrounding the issue of homosexuality.

Shaw said the human rights report shows how through the guise of 'corrective rape' lesbian women are raped by men to 'make them enjoy heterosexual acts', while gay men are raped by women, sometimes, under supervision of villagers and relatives to 'remove their sexual orientation tendencies'.

The journalist said the report shows how some homosexuals are forced to marry to encourage heterosexual conduct, while others are 'taught the errors of their ways' by being raped by family members.

The gay community has long been under siege in Zimbabwe and hate speech against this group is common. Robert Mugabe says homosexuality is 'abhorrent' and famously described homosexuals as "worse than dogs and pigs".

Recently both the principals in the inclusive government, Mugabe and Morgan Tsvangirai, publicly condemned the practice of homosexuality, with Mugabe adding that he would not allow any gay rights to find their way into the new constitution.

The two were speaking at an International Women's Day celebrations in Chitungwiza, where the theme was 'Equal Rights, Equal Opportunities: Progress for All'.

Engaging in homosexual acts is unlawful under the common law offence of sodomy and the issue of gay rights has now become a hot debate in the discussion on a new constitution.

Meanwhile, the Zimbabwe Human Rights NGO Forum urged the political leaders to desist from making statements likely to promote hate and prejudice, especially when the country is going through a transition from a period characterised by hate, violence and economic suffering, and hopefully moving towards national healing.

The group said in a statement: "We support a Constitution that protects Zimbabweans against discrimination on the basis of sexual orientation, just as it prevents discrimination on grounds such as race, gender, ethnicity, or religion. The immediate challenge the nation is facing is overcoming social deprivations in areas such as hunger, health, education, unemployment and violence against women and children and above all the functionality of the GNU. These are the areas in which the Principals in the GNU should be providing leadership; rather than fostering antipathy and intolerance."