U.N. Inaction on Cuba
All Actions of the UN Human Rights System Critical of Specific States, 2018 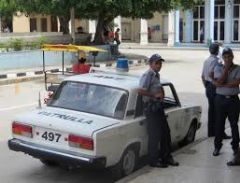 Three Cuban artists including Tania Bruguera have gone on hunger strike in protest at a new law that will require all artists and musicians to apply for government-issued licences. Described by Amnesty International as "dystopian", the law, Decree 349, is expected to be ratified this month by Miguel DÃ­az-Canel, the country's president.

Bruguera, whose work currently fills the Turbine Hall at London's Tate Modern, was taken by police from her home in the Cuban capital on Monday morning ahead of a planned demonstration outside the ministry of culture. Her fellow artists Luis Manuel Otero AlcÃ¡ntara and Yanelys NÃºÃ±ez Leyvawere also picked up on the street by police on Monday and transported to the Vivac prison on the outskirts of Havana, a move that suggests they will be detained for a longer period.

Bruguera was released within 24 hours but taken back into custody as she headed to the ministry of culture to protest. All three â along with fellow activists Amaury Pacheco and Michel Matos â have vowed to go on hunger strike.

"The decree criminalises independent art activity," the Cuban-American artist Coco Fusco says. "It allows a cadre of roving censors to go around issuing fines, to take away your equipment. These are not liberal individuals â if you are a rap musician and they simply don't like your lyrics, they will shut you down. These draconian actions already take place but this law systemises it."

Decree 349 marks a backwards step from a number of reforms made by RaÃºl Castro, after the former president met with Barack Obama in 2015 â only the second time in 50 years a Cuban leader had met his US counterpart. The ensuing optimism has been short-lived. In May â a month after DÃ­az-Canel became the first leader from outside the Castro family since the revolution in 1959 â the Cuban government dismissed recommendations by the United Nations that it establish an independent national human rights institution, release political prisoners and end the harassment of artists and activists.

While the majority of contemporary art exhibitions in Cuba take place in artist's living rooms and studios â which the new law seeks to regulate â a few private galleries opened in the wake of what had seemed a thaw in international relations.

In 2014, the Italian gallery Continua helped one of its artists, Michelangelo Pistoletto, with a project for the Havana Biennale that involved mapping out the infinity sign on the sea using local fishing boats. "At that point we did not ask permission, because we knew it would be refused," says gallery partner Lorenzo Fiaschi. A year later, however, Continua worked with the government to take over a former cinema in the capital's old town, where they have since shown exhibitions by international and Cuban artists. The gallery must have its programme approved by the ministry of culture. "Our conversations are friendly," says Fiaschi. "But we have to be careful, we have to respect them. I would never do a show of Ai Weiwei for example. I would not put myself in that situation."

Yoan Capote, a sculptor, also says things have got better, despite the very recent developments. A Cuban native, he has remained in the country even though he has travelled to the US on a number of occasions. "It is easier to be an artist now than in the 1960s. If you compare it to then, the government is more tolerant [and] you can sell your works." Gesturing around his expansive studio on a leafy street in Havana, he says: "I couldn't have had a studio like this back then â people weren't even allowed big houses." Nonetheless, given the situation here, coupled with the fact he has a New York gallery representing him, is he not tempted to leave? "In Cuba, I have something very valuable: time. Time is not monetised here, so I have time to think and reflect. I would not have that abroad."

While Continua represent 12 local artists, including Capote, it is not allowed to sell work within the country. Nonetheless, there are a couple of homegrown commercial galleries operating illegally in Havana. El Apartamento is located in a residential block in an anonymous suburb of the capital. "We've developed a good programme since 2015 and work with some great artists, which gives us a degree of protection," a staff member says. "But we must be discreet." One veteran Cuba-watcher with business interests in the country, who also asked not to be identified, likened the situation to China. "It is a capitalist-communist country now. They are opening up to business, allowing private enterprise, while making an example of the cultural sector."

In an interview published on Wednesday, Fernando Rojas, the vice minister of culture, told Associated Press that the government were listening and amendments would be made. He denied inspectors would able to enter private homes or artists' studios and said that investigations would only be carried out if a complaint was received.

Bruguera's arrest this week is not her first. In 2014, she attempted to reprise a 2009 performance titled Tatlin's Whisper in Havana's Revolution Square. In the work, the artist provides a platform and microphone and invites anyone to come on stage and speak freely for one minute before they are removed by actors in military fatigues. She was arrested at home before she set off for the square, released after 24 hours and rearrested two subsequent times. The pattern is a familiar one for high-profile individuals, ensuring that, by the time international media and NGOs hear of the incident, the person is free but intimidated.

Fiaschi says that the vocal protests in Cuba are not the right approach to effect change.

"There is a group of artists who have been working with the government, trying to make alterations to Decree 349, giving advice in private. To write a public letter, to put it on the internet, and make a public noise is not a good way of dealing with the situation. You have to be tactical in Cuba."

Fusco is vehemently opposed to that idea. "My problem with all the foreigners who say they love Cuba is that they never open their mouths. They allow stuff here that they wouldn't let go on in their own country." The gallerist at El Apartmento agrees. "There's discussion," she shrugs. "But it is theatre."