U.N. Inaction on Cuba
All Actions of the UN Human Rights System Critical of Specific States, 2016 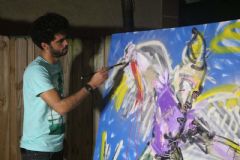 One of Cuba's most prominent anti-Castro artists is refusing to eat food served by his jailers, alleging that they have laced it with pills that induce drowsiness, those close to him say.

Danilo Maldonado, known as "El Sexto," was taken by Cuban security agents the day after the death of former leader Fidel Castro. Maldonado, 33, still has not been charged, but those familiar with the graffiti artist's actions that morning say that he posted a Facebook message seemingly gloating over Castro's death and urging people to "come out to the streets...and ask for liberty."

Maldonado also is said to have spray-painted "El Sexto" on a wall near Hotel Habana Libre.

His girlfriend, a writer who lives in Miami, said that Maldonado has been transferred several times since his arrest on Nov. 6. Alexandra Martinez told FoxNews.com Monday that Maldonado's mother, Maria Victoria Machado, who has been allowed to visit her son briefly twice since he has been in the custody of Cuban security police, told her that the artist was beaten the day he was taken from his apartment, as well as last Tuesday.

"He's an artist, he's a human being who is just using his voice" and art for peaceful expression, Martinez said. "There are still no charges. He was taken to police stations and now a detention center that is maximum security."

Maldonado had been slated to be at a Miami premiere of an HBO documentary that features him titled "Patria o Muerte: Cuba, Fatherland or Death" last week, Martinez said.

"The Cuban authorities have a history of detaining El Sexto ahead of many planned performances, but Castro's death appears to be the impetus for this particularly aggressive assault," said Julian Schnabel, the producer of the HBO documentary, in a statement quoted by the Miami Herald.

Other Cuba experts say that while Cuban authorities routinely detain prominent dissidents without pressing charges before, during or after a high-profile event, in recent years they have kept them in custody for less than a day, usually a few hours.

They say that Maldonado's extended detention is particularly hard-line.

"The classic pattern in the last couple of years is that police come and arrest dissidents either because they're having a demonstration, or they're planning to have one, and they hold them for shorter periods of time than before, and then let them go without charges," said William M. LeoGrande, a professor of government at American University, and co-author of "Back Channel to Cuba: The Hidden History of Negotiations between Washington and Havana."

"The police has hit upon this as disrupting dissident activity without processing people through the justice system," LeoGrande said. "For [Maldonado] to have been in jail for a long period of time without charges is unusual."

Maldonado, who is active on social media, spent 10 months in jail about a year ago after he posted a photo of two pigs with "Fidel" written on one and "Raul" on the other.

The Human Rights Foundation said on its Facebook page that the Cuban government had charged Maldonado in 2015 with "criminal defamation" for linking the Castro brothers with the pigs, which the artist had prepared for a performance of George Orwell's "Animal Farm."

Amnesty International declared Maldonado a prisoner of conscience, and Human Rights Foundation awarded him the Vaclav Havel Prize for Creative Dissent after he used the pigs to portray the Castro brothers.