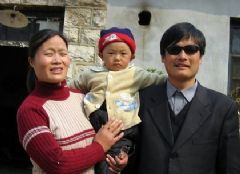 Dissident Chen in Reversal Seeks to Leave China After Threats

May 3 (Bloomberg) -- Chinese legal activist Chen Guangcheng was being treated yesterday in a Beijing hospital after leaving the U.S. embassy in a deal that quickly started to unravel and now threatens to derail annual cabinet-level talks between the two nations.

Chen said that, fearing for the safety of his family, he changed his mind about staying in China under a deal worked out by the U.S. and now wants to leave with his family, according to interviews by the Associated Press and CNN. He appealed to CNN to seek help from U.S. Secretary of State Hillary Clinton.

"The embassy kept lobbying me to leave and promised to be with me at the hospital," he told CNN, according to a transcript. "But this afternoon soon after we got here, they were all gone. I'm very disappointed at the U.S. government."

Chen's case is a test for the leaders of the Communist Party as they seek to restore political calm following the ouster of Politburo member Bo Xilai last month. President Barack Obama risks drawing Republican criticism for failing to adequately press Chinese authorities hard enough on human rights. Chen, an advocate for villagers resisting forced abortions who had fled detention at his home in eastern China last month, was reunited with his wife and two children yesterday after U.S. Ambassador Gary Locke escorted him to the hospital, American officials told reporters on condition of anonymity.

Chen, who is blind, told CNN that, after his escape, his wife had been tied to a chair for two days by police who threatened to beat her to death.

Before Chen's public comments, U.S. officials described a deal with Chinese authorities permitting him and his family to relocate in China so he could study law, and said the U.S. would monitor China's compliance.

Hours later, the Associated Press reported that Chen said by phone from the hospital that he now wants to leave China with his family. Chen said a U.S. official had relayed a threat by Chinese authorities to beat his wife to death if he stayed in the U.S. embassy, according to the AP.

In response, State Department spokeswoman Victoria Nuland said Chen didn't ask for U.S. asylum during his time in the embassy, and denied any U.S. official passed on Chinese "physical or legal" threats.

"He expressed his desire to stay in China, reunify with his family, continue his education and work for reform in his country," she said.

Still, Chen had reason to worry about the fate of his family if they were sent back to Shandong province, where he has said they were beaten during home detention without charges. "U.S. interlocutors did make clear that, if Chen elected to stay in the embassy, Chinese officials had indicated to us that his family would be returned" to their home and they would lose their opportunity to negotiate for reunification, Nuland said yesterday in an e-mailed statement from Beijing. With the next steps unclear, the controversy over Chen and human rights issues in China again threatens to upstage this week's talks between Clinton, Treasury Secretary Timothy Geithner and their Chinese counterparts.

Chen's case has created "the most complicated period I've seen in the relationship since 1989," when the Tiananmen Square massacre took place, David M. Lampton, a board member of the National Committee on United States-China Relations, said yesterday.

He likened the ties between the two countries to a truck with a very bad suspension "and more and more gets loaded on." The two countries are juggling issues as diverse as Iran, Syria, North Korea, the South China Sea and cyber espionage, Lampton said.

U.S. officials said China promised that Chen will be treated humanely. The foreign ministry demanded the U.S. apologize for allowing Chen into the embassy.

On the way to the hospital, Chen, a self-taught lawyer who received assurances that he would be able to attend law school in China, asked to speak with Clinton by phone, the American officials said yesterday. He expressed gratitude for her support, told Clinton he was prepared for the struggle ahead and said in English, "I want to kiss you."

"Mr. Chen has a number of understandings with the Chinese government about his future, including the opportunity to pursue higher education in a safe environment," Clinton said, according to an e-mailed statement. "Making these commitments a reality is the next crucial task."

The arrangement would remove Chen from persecution by local officials in Shandong province, who had held him under extrajudicial detention in his home. Chinese officials agreed to have Chen and his family relocated to a safe place in China and said that authorities will investigate the extralegal detention and alleged abuse of Chen by local officials, according to U.S. officials.

Cheng Li, a senior fellow at the Brookings Institute, a Washington policy group, said a message that Chen's family would be returned to Shandong if he didn't leave the embassy could be seen as a veiled threat.

AP quoted Chen as saying in an interview, "I think we'd like to rest in a place outside of China." He appealed for assistance from U.S. officials, saying "help my family and me leave safely," according to AP.

Bob Fu, president of Midland, Texas-based ChinaAid, a human rights group, said yesterday he had spoken with three people who have had contact with Chen. "We can clearly tell you that Chen Guangcheng wants to leave China with his family," Fu said.

Fu said Chen's comment to Clinton was misinterpreted and he had said, "I want to see you," not "I want to kiss you." The U.S. has "abandoned" the activist, Fu said in a telephone interview. U.S. Assistant Secretary of State Kurt Campbell said, "Chen made the decision to leave the embassy after he knew his family was safe and at the hospital waiting for him, and after twice being asked by Ambassador Locke if he was ready to go."

"He said, 'zou' -- let's go," Campbell said yesterday in a statement. "We were all there as witnesses to his decision, and he hugged and thanked us all."

Chen was escorted to the hospital by Locke, Campbell and State Department legal adviser Harold Koh, U.S. officials said. Chen had injured his foot after jumping over a wall during his escape from detention at his home. He had been held under house arrest without charges since he was released from prison in September 2010.

The family reunion at the hospital included a son who had been taken from him more than two years ago, according to a U.S. official.

Chen made his way to the U.S. embassy "via abnormal means" and China is "strongly dissatisfied," Foreign Ministry spokesman Liu Weimin said yesterday in a statement that also demanded a U.S. apology.

Chen, who was blinded by a fever in infancy and was illiterate until his 20s, was jailed for more than four years after filing a lawsuit protesting forced sterilizations. After his release in September 2010, he and his wife were confined to their home. In a video recorded after his escape, Chen said reports that he and his family were beaten during his house arrest were true.