U.N. Inaction on China
All Actions of the UN Human Rights System Critical of Specific States, 2021 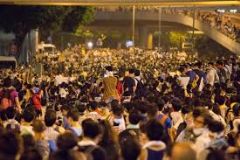 Forty-seven Hong Kong pro-democracy campaigners and activists were charged on Sunday with conspiracy to commit subversion in the largest single crackdown on the opposition under a China-imposed national security law.

Among them was Sam Cheung, a 27-year-old activist and a participant in an unofficial primary election last summer, who was charged after reporting to a local police station.

"Hong Kongers have a really tough time these days," he told reporters before entering the station. "I hope everyone won't give up on Hong Kong ... (and) fight on."

Cheung was arrested in a dawn raid along with 54 other pro-democracy campaigners on Jan. 6 in the largest national security operation since the law passed last June.

They were accused of organising and participating in the unofficial primary last July aimed at selecting the strongest candidates for a legislative council election.

The Hong Kong police said in a statement they had laid a charge against 47 persons with the single count. They will appear in court on Monday morning.

The European Union Office in Hong Kong called for the immediate release of those arrested.

"The nature of these charges makes clear that legitimate political pluralism will no longer be tolerated in Hong Kong," it said in a statement.

Some who reported to police stations across the city pumped their fists and expressed defiance, flanked by supporters.

Of those arrested in January, only eight were not charged on Sunday, including U.S. human rights lawyer John Clancey and veteran activist James To, who remain on bail.

The tightening legal noose on local activists comes as Chinese officials prepare to unveil electoral reforms that will likely further diminish the role and influence of opposition forces in public office.

"This is a very strong signal from President Xi (Jinping) that he wants to eradicate the whole pro-democracy camp in Hong Kong," exiled activist Sunny Cheung, who had himself taken part in the primary election, told Reuters by phone.

"If the international community doesn't react to the authoritarianism of the Chinese Communist Party, Xi will win and liberty and democracy will fall."

A rights advocacy group, "Power for Democracy", which co-organised the primary elections, said in a Facebook post it had disbanded.

The Hong Kong police say 99 individuals have been arrested for suspected violations of the security laws so far.

Some of these, including media mogul and prominent China critic Jimmy Lai, have been denied bail despite protracted legal appeals.

China justified the laws to restore order following mass protests in 2019 against perceived Chinese suppression of Hong Kong's basic liberties and autonomy under the "one country, two systems" arrangement. This was put in place in 1997 when the city reverted from British to Chinese rule.