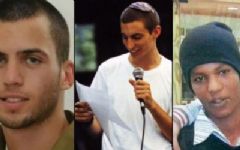 A former Hamas leader said the Gaza-ruling terror group must gain "bargaining chips" to use in a prisoner exchange deal with Israel.

In a recorded statement released Saturday, Khaled Mashaal said Hamas must make Israel pay a price similar to a 2011 swap in which the Israeli government freed over 1,000 convicted Palestinian terrorists for IDF soldier Gilad Shalit, who was captured in 2006.

"After this deal the enemy tried to limit itself and not approve an additional exchange deal, to discourage the Palestinian resistance," Mashaal said, according to the Ynet news site.

He added: "We know this is a drill, part of the physiological war. When we hold an Israeli soldier, the Israeli leadership can only agree to our demands."

Mashaal, a West Bank native now living in Qatar, headed the Hamas political bureau from 1996 to 2017, when he was replaced by incumbent leader Ismail Haniyeh.

Hamas is currently believed to hold two Israeli civilians, Avera Avraham Mengistu and Hisham al-Sayed, who entered Gaza of their own accord in 2014-2015, and the remains of two Israeli soldiers, Sergeant First Class Oron Shaul and Lieutenant Hadar Goldin, killed in action during the 2014 Gaza war.

Since their capture Israel has worked to secure their releases, often using the Egyptian military, which maintains ties to both Jerusalem and Hamas, as an intermediary.

Hamas seeks the release of Palestinian security prisoners in Israeli jails - both members of Hamas and of other terror groups. Some of the prisoners had already been freed during the 2011 prisoner exchange deal, but were re-arrested during a 2014 crackdown on the terror group in the West Bank following the abduction and murder of three Israeli teenagers.

Though Israeli officials have acknowledged that talks are ongoing for the release of Israeli captives held by Hamas, they have refrained from discussing the specific proposals and offers being made in the negotiations.