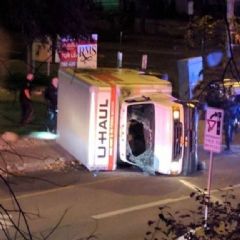 The van used during the attack

Canadian police have confirmed they are investigating possible acts of terrorism after multiple incidents in Edmonton, Alberta, on Saturday night.

They said a police officer controlling traffic at a Canadian Football League game was struck by a car at high speed and then attacked with a knife.

A man driving a van went on to hit at least four pedestrians and was arrested two hours later after a police chase.

Police said an Islamic State (IS) group flag was found in one of the vehicles.

Edmonton Police Service Chief Rod Knecht said the officer and his vehicle were rammed by a white Chevrolet Malibu at about 20:15 local time (04:15 GMT) outside Alberta's Commonwealth Stadium.

The driver then got out of his vehicle and stabbed the uniformed officer several times, before fleeing on foot. The officer was taken to hospital but his injuries are not thought to be life-threatening.

Chief Knecht said information about the vehicle's registered owner was broadcast to patrol officers. Shortly before midnight, a man driving a U-Haul rental van was pulled over at a checkpoint after his name on documents was said to be "very similar" to the one police were searching for.

"The U-Haul truck then immediately fled the scene, and was pursued by police officers toward downtown Edmonton," the police chief said.

He said the truck "deliberately attempted to hit pedestrians" during the police chase.

The driver, a 30-year-old male, was arrested after his vehicle overturned in a police chase.

The condition of the four injured pedestrians is not yet known.

"Based on evidence at the scenes and the actions of the suspect, at 00:38 it was determined these incidents are being investigated as acts of terrorism."

Police said the arrested individual had been known to authorities.

They said they currently believe the suspect acted alone, but are not ruling out the involvement of any others.