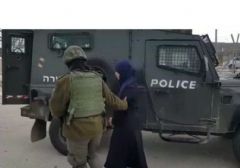 A 28 year old Saudi woman has been sentenced to 200 lashes and six months in jail for indecency and speaking out to media about her subjection to a gang rape in 2006, Iranian PressTV reported Saturday.

The woman was, back in 2006, driven to a secluded area after entering the car of a student friend when she was 19 years old. There, she was raped by seven men, according to the report.

According to Saudi legislation, women must at all times be accompanied by a male family member in public. The victim was initially sentenced in court to 90 lashes for not adhering to this law; Her rapists were sentenced to five years in prison.

The sentence was appealed by the victim's lawyer. Yet instead of mitigating her sentence, the courts worsened it whilst banning her lawyer from the case and stripping him of his license under the claims that the woman committed the offense of speaking to media in addition to the indecency she was originally sentenced for, PressTV reported.

The harsh verdict has been condemned by politicians and human rights organizations.

Human Rights Watch said, according to PressTV, that the ruling both "sends victims of sexual violence the message that they should not press charges...and offers protection and impunity to perpetrators."