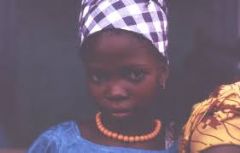 A 10-year-old girl has died after undergoing female genital mutilation during a mass initiation into a secret society in Sierra Leone.

The girl, one of 68 involved in the rite, bled to death on Tuesday following complications from the FGM procedure.

Activists said the ceremony took place in the "bondo bush" â secluded forest â in the northern province of Tonkolili district, roughly 150 miles east of the capital, Freetown. A number of women, as well as cutters, known as soweis, are now on the run, among them the deceased girl's mother, said Rugiatu Turay, a former government minister who founded the Amazonian Initiative Movement, a grassroots group dedicated to ending FGM.

The girl, who has been named as Marie Kamera, had just sat her year-five exams when she was rushed off to the initiation, said Turay.

"As soon as she dropped the pen, she was taken away," she said. "This is the second time that a girl has died in that family: one of the sisters died of excessive bleeding after being initiated two years ago, and the father was against it this time, but the mother is the breadwinner in the family and she wanted it.

"Being the breadwinner does not give you the right to take the life of your child. We want to ensure that this incident is regarded as child abuse and use this as a test case to push the government to strengthen different institutions to take action when incidents like this happen."

Three girls who were initiated into the secret women's society at the ceremony, all aged between 10 and 11, have been taken to a nearby police station for questioning, said Turay.

The chief sowei, Ya Naro Kargbo, has been arrested and is helping police with the investigation, she added.

All 67 surviving girls should be seen by medical staff to ensure the procedure hasn't resulted in any infections, said Turay.

FGM is a common practice in Sierra Leone, where nine in 10 girls are cut, often with crude instruments such as penknives, broken glass and razor blades, according to the World Health Organization. The ritual involves the partial or full removal of the female genitalia and can cause serious health injuries.

Although it has been technically banned since emergency health measures were introduced after the 2014 Ebola outbreak, FGM has a strong government lobby. As a result, the government is one of only a few globally that has failed to outlaw the practice, said Turay.

Even a campaign launched this week by Fatima Maada Bio, the first lady of Sierra Leone, called "hands off our girls", focuses on early marriage and rape and does not mention FGM, said Alimatu Dimonekene, founder of the anti-FGM Project ACEi.

"We cannot address rape and ignore FGM," said Dimonekene. "FGM is the construct of systems that drive rape and all other forms of sexual violence and abuse of our girls in Sierra Leone. The government of President Julius Maada Bio must be seen as doing all it can to safeguard and protect women and girls from FGM. For years previous governments have ignored the issue."

Turay added: "These girls are dying and nobody's protecting them, not the government, not the police; even FGM campaigners are threatened. We need to use this incident as a test case: we don't want a situation like when a 19-year-old died [from FGM in 2016] and the post-mortem results were changed [to hide the cause of death]. We need to be ashamed."

"This girl's death is devastating and shows yet again that FGM needs to be ended immediately," said Wynne.

"The most effective way of doing this is to get much increased funding to grassroots activists who are doing most of the work on this issue on a shoestring."