U.N. Inaction on Guinea
All Actions of the UN Human Rights System Critical of Specific States, 2019 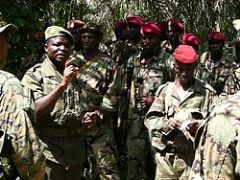 Nine protesters were killed this week in Guinea during demonstrations against a possible change to the constitution that could let President Alpha Conde seek a third term, the government said on Wednesday.

Police opened fire on demonstrators on Monday as they ransacked military posts and blocked roads with burning tyres in the capital Conakry, while protests in the northern opposition stronghold of Mamou also turned violent, witnesses said.

Protests have continued since then with decreasing intensity but they point to the kind of upheaval Conde faces if he tries to extend his rule beyond his legally-alloted two terms.

"The government deeply regrets, and also strongly condemns, the incidents...and has instructed the relevant authorities to shed light on the facts in order to pull together all the evidence," General Bourema Conde, the minister of territorial administration said in a statement.

A coalition of opposition groups said on Wednesday that the police had killed 10 people since Monday. It provided a list of the dead, all males under the age of 30 and including a 14-year-old schoolboy called Boubacar Diallo.

The coalition said in a statement that a further 70 protestors had been wounded by bullets and 200 people had been arrested. Police raided homes and assaulted family members of the dead, it said.

The government did not respond to these allegations.

Conde's second and final five-year term expires in 2020 but the 81-year-old leader has refused to rule out running again. He asked his government last month to look into drafting a new constitution, raising concerns that he might use it as a reset button on his presidency and run again.

Extending his mandate would mark a turnaround for Conde who as an opposition leader railed against militarised, autocratic regimes.

His first election win in 2010 raised hopes for democratic progress in Guinea after two years of military rule and nearly a quarter a century under authoritarian President Lansana Conte, who died in 2008.

However, tinkering with term limits or eliminating them altogether has been part of the playbook of African rulers even during a recent push towards democracy in parts of the region.

Rwanda's Paul Kagame and Congo Republic's Denis Sassou Nguesso easily pushed through new constitutions in 2015 that allowed them to stay in power.

Even measures ostensibly passed to introduce term limits have been used to extend mandates.

In Chad, a new constitution passed last year reimposed a two-term limit scrapped in a 2005 referendum. But it will not be applied retroactively, meaning President Idriss Deby could serve two six-year terms after the next election in 2021.

A change in Togo's law voted through in May capped mandates to two five-year terms. But like Chad it was not retroactive and could allow longstanding President Faure Gnassingbe to stay in power until 2030, extending his family's rule to 63 years.