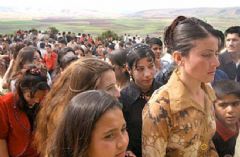 Hanifa’s Story: Five Sisters Taken by ISIS to Be Sold or Worse

When word reached Hanifa and her family that the fighters of the so-called Islamic State were approaching their village, they knew they would have to flee, and fast. The fanatics were coming on like a storm sweeping through the desert, and Yazidis like Hanifa's family were the special targets of their hateful fury.

But Hanifa's father is partially paralyzed, unable to walk, and diabetic. She and her mother and young brother rushed to get him in the car and drive him to the uncertain refuge of the mountain that looms above the town of Sinjar. Hanifa's five younger sisters, aged 10 to 22, would follow as soon as they could gather their documents-their Iraqi IDs and ration cards.

When Hanifa reached what seemed a safe place on the mountainside, she called her sisters. But they were not behind her. They were not coming. "They said they've been taken by Daash," as Arabic speakers call the group formerly known in English by the acronym ISIS. "They said not to come back," Hanifa told me.

As President Barack Obama continues to ratchet up support for Kurdish fighters battling against the Islamic State in northern Iraq, hopes are raised that somehow the depredations wrought over the last few weeks can be reversed. But conversations with Hanifa and others like her among the refugees suggest there's little chance they will return home again, or ever restore their families to the way they once were.

Hanifa and her father and mother and brother spent 10 days on the mountain, fearing for the girls, but powerless to help them. One of the sisters had managed to hide her cellphone, and for the first few days they were able to communicate sporadically. They said they were being held in a mosque in Tel Afar, and the men of the self-proclaimed caliphate were ordering them to forget their Yazidi faith, which dates back before Islam and Christianity to the teachings of Zoroaster.

Then the sisters said they were being held in a prison, possibly in the town of Badush between Tel Afar and the caliphate's capital, Mosul. In the last conversation, now, several days ago, the girls said they had been told to convert to Islam or die. Hanifa's sisters told her that other girls had agreed to do so, but they had not. The oldest of the captive sisters was pretending to be the mother of the youngest girl, hoping they would be kept together. The other three teenage sisters were taken away, she said over her hidden phone. She did not know where they had gone. She warned Hanifa not to call, for fear the phone would be discovered. And then, there were no more calls. (updated)

Finally, Hanifa and her parents and brother escaped from the mountain as others did, along a path opened up by the YPG, the Syrian branch of the Turkish-Kurdish PKK.

Now Hanifa and those who are left of her family are living under a sheet tied to scrounged sticks in a dirt field. She sat on a large piece of cardboard as we talked. They had no pot to make tea-and no tea to offer. They have no documents. Their living conditions are among the worst for displaced people here, and there are hundreds of families like them in the fields around them.

"We don't want food or money, we just want out daughters back," said Hanifa's mother.

Hanifa's determination shows clearly in her handsome features and through her dark eyes, even when they are filled with tears. As the eldest sister she has played a huge role raising the other girls and her 12-year-old brother. It is hard to live in a family where the father is sick, and her father, here under the plastic sheet that barely protected us from the glaring sun, appeared very frail indeed. He had survived somehow for ten days on the mountain only to walk, and be carried, over 20 kilometers to this place of fragile refuge. "We have nothing but our children," he told me.

As we talked, another woman sat down with us. Wahida is from the town of Hardan, on the northeast side of the mountain, where some 450 people were killed in one of the largest massacres to be reported. A Muslim Kurdish tribe from a nearby town actually helped ISIS carry out the attacks. Of Wahida's family there, she said ISIS killed 19 boys and carried off two girls. In the first days after they were taken, she heard they were in Tel Banat, south of the mountain, but she hasn't heard anything since. (updated)

The chances that any of the girls will be returned any time in the near future diminish by the day, and the possibility looms that they never will be seen by their families again.

Among the Yazidis who made it to relative safety in Kurdish-controlled territory, fact and rumor are hard to parse, but the stories of what has happened in the towns and villages they left behind are consistent in some basic, horrifying aspects.

In all, some 500 women and girls are believed to have been taken by the Islamic State. When the fighters attacked Yazidi villages and towns in Sinjar and environs the men were lined up and shot; the women were rounded up and trucked off. Some were taken to Tel Afar and Badush prison. Some were taken to parts of Syria where the caliphate rules as well. Most troubling are reports that girls are being sold as slaves in Mosul for $500.

Yazidis appear to be the only community whose girls and women have suffered this fate. They have been singled out because they are not monotheists-Muslims, Christians or Jews-considered "people of the Book."

Alyas Saleh Qassim, a man who survived a massacre in the town of Kucho by playing dead, hiding under the corpses of friends and relatives, says the Islamic State fighters separated the men from the women and children, who were sent to a school, but he has no idea what happened to his wife and seven kids. "I want to die," he told me. "What do I do without my family and children?"

Because so many men were killed, it's almost impossible to know how many other women and children have gone missing. In some cases entire families have disappeared and distant relatives have no idea how to find them. In many cases, family members who managed to survive are scattered far and wide across Kurdish territory.

Now that Americans are ever more involved in the fight against the Islamic State, some Yazidis hope their girls may be rescued by military action. But that's neither likely nor feasible, especially when women have been taken to Mosul or to Syria. For Hanifa and her family, only tears can begin to express their grief, and they flow almost all the time.