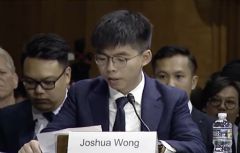 Joshua Wong, who emerged from a 79-day street occupation in 2014 as the leading face of a new generation of young activists who infuriated China's leaders, was jailed for more than a year on Wednesday for inciting and organizing protesters who besieged Hong Kong police headquarters last year.

Magistrate Wong Sze-lai said a deterrent sentence was necessary to safeguard the public interest as she imprisoned Mr. Wong for 13 Â½ months. He and two fellow activists earlier all pleaded guilty to charges including inciting the rally that ramped up tensions between protesters and police early in last year's mass uprising. Agnes Chow, who turns 24 on Thursday, wept after being sentenced to 10 months. Ivan Lam, who is 26, received a seven-month term.

The demonstration outside the police force's headquarters on June 21 last year marked an escalation in the protests that had begun in earnest nine days earlier and gripped Hong Kong through 2019. That night, thousands besieged the force's high-rise downtown offices, as anger grew over the use of force by the police in an earlier protest. Officers were unable to leave for many hours, as some protesters pelted the building with eggs, daubed graffiti on the walls and left dog biscuits for police officers they taunted as dogs.

The sentence is the harshest yet imposed on the 24-year-old Mr. Wong, who has previously served separate monthslong prison terms on charges stemming from the protests in 2014, and comes amid Beijing's hardening crackdown on the city's pro-democracy movement. China has imposed new laws while police have arrested a slate of high-profile activists in the wake of the monthslong protests last year that posed the biggest open rebellion to China's Communist Party in decades.

Political analysts and opposition members say targeting the former student, who still faces other charges related to last year's turmoil, is aimed at silencing other activists.

"Given his record of success, it is especially important for the government's effort in attempting to subdue Hong Kong's democracy movement that he be prominent among the activists to be punished," said Suzanne Pepper, an independent academic who has studied Hong Kong affairs for decades. "This will serve as an example to others."

Since Mr. Wong was remanded in jail last week to await sentencing, he has managed to make public statements through a letter on his Facebook account and messages relayed through friends who visited him.

"Cages cannot lock up souls," Mr. Wong wrote in one online post, adding that pain and suffering "would only strengthen our courage and conviction for democracy and justice."

To quell such opposition in the future, Beijing imposed national security legislation at the end of June that has muzzled academics, journalists and politicians. Mr. Wong was among candidates barred in July from running for elections for the city's legislature. Street protests have also been prohibited during the coronavirus pandemic.

Mr. Wong is a frequent target of Chinese state media. In one commentary published before the trial, Hong Kong-based Wen Wei Po newspaper called him a threat that shouldn't be released back to freedom. "To tolerate Joshua Wong is a blasphemy to law and liberty," it said. "Mercy for Joshua Wong is equal to tolerance to violence."

A small group of elderly pro-China protesters gathered outside the court on Wednesday to demand a long sentence for Mr. Wong, while supporters of the activists waited anxiously inside the court. As he was escorted out, Mr. Wong told the supporters to "hang in there," as the future would be tough. Through his lawyers, he later said he would continue to fight from prison.

Mr. Wong became the face of the post-90s generation of activists, born around or after the handover of Hong Kong's sovereignty from the U.K. back to the mainland in 1997. In 2012, he gained local attention by organizing sit-ins to protest a plan to impose national education in Hong Kong. The local government then shelved the plan.

In 2014, Mr. Wong was a regular presence and one of the student leaders of the Umbrella Movement, a near three-month occupation of some of the city's busiest streets. It was an ultimately unsuccessful protest against a decision by Beijing to grant everyone a vote for the city's chief executive, but with candidates limited to those approved by the Chinese government. That year, Mr. Wong made the cover of Time magazine and his youthful, bespectacled looks and willingness to publicly challenge Beijing drew international attention.

"He has given our generation an important voice," said Jeffrey Ngo, a 25-year-old Washington-based student activist who worked with Mr. Wong in the youth political group Demosisto before it was disbanded on June 30 when the national security law came into place. "The symbolic meaning of his imprisonment is strong."

As the pro-democracy movement floundered in the years following the Umbrella Movement, Mr. Wong co-founded Demosisto as a way of entering political life with the backing of a party.

In 2019, when mass protests first erupted in Hong Kong over a proposed extradition bill, Mr. Wong followed the developments from his jail cell, where he was imprisoned on charges related to the 2014 protests. He was released about a week after the first mass protest and joined the fray.

Footage shown by prosecutors to a court last week showed Mr. Wong calling on protesters to surround the police headquarters as numbers swelled into the thousands at the June 21 protest.

By then, Mr. Wong was less influential as younger demonstrators stepped up the fight and declared the movement leaderless. But he was often present at rallies and spoke out when many others sought anonymity behind gas masks and communicated under pseudonyms on platforms such as Telegram.

Mr. Wong drew ire from Beijing in 2019 for his participation in a September U.S. congressional hearing where he urged Congress to pass a bill that would allow for greater sanctions against the city in the face of further crackdowns on civil liberties. The bill was passed two months later by the House and Senate, and signed by President Trump soon after.

Despite officials invalidating his candidacy for legislative elections, Mr. Wong was among the candidates with the most votes in an unofficial primary held by the democratic camp in July.

"His ability to bring the voices of Hong Kongers to the international community is unmatched," said Sunny Cheung, a 24-year-old activist who testified alongside Mr. Wong last September and who has since left Hong Kong, citing safety reasons. "Whenever it feels like the movement is losing momentum and vigor, he is the one who always has faith in Hong Kongers."