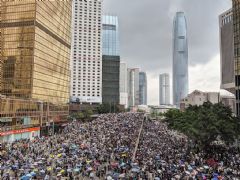 Beijing forced the expulsion of four pro-democracy Hong Kong lawmakers, prompting the rest of the opposition bloc to resign in protest at China's intensifying crackdown on dissent in the city.

Hong Kong's government Wednesday said that the democratically elected legislators had been disqualified with immediate effect. The government announced the move minutes after China's legislature passed a resolution that empowered local officials to unseat dissenting politicians without going through the courts.

Slamming Beijing's decision as another assault on the freedoms China had guaranteed the former British colony until 2047, the group of 19 pro-democracy legislators said that quitting was the biggest possible protest they could make.

"Today starts a whole new ballgame on how the battle of democracy will be fought in Hong Kong," said Wu Chi-wai, the convener of the group, who separately confirmed the intention of the other 15 pan-democratic lawmakers to resign on Thursday. "Sooner or later we would all have been disqualified."

The resignations leave the city's mostly pro-Beijing legislature as effectively a rubber stamp for government policy and laws. The move threatens to upend decades of rough-and-tumble legislative politics in the city-where the opposition has at times delayed, amended and even thwarted government legislation.

Beijing's decision dealt another blow to the city's already reeling opposition movement. Dissent has been shrinking in the city since Chinese leaders imposed a national security law on Hong Kong in late June, leading to the arrests of some high-profile politicians and activists, while others have retreated from the public eye or fled abroad.

Opposition lawmakers have remained vocal in the legislative chamber, drawing criticism from officials for their delaying tactics over legislation they oppose. Several were recently arrested by police over a May scuffle in the legislature.

The city's top local official, Chief Executive Carrie Lam, said Wednesday the ruling followed an August decision by Beijing's top legislative body that extended the incumbent legislative term by a year after elections set for September were postponed, a delay officials attributed to the coronavirus pandemic.

The four ousted lawmakers had been among 12 disqualified from that election for a variety of reasons, including alleged doubts about their allegiance to the territory and their public political views. Mrs. Lam said that addressing the issue of the disqualified candidates serving in the extended legislative term had required further clarification from central authorities.

She said the disqualifications were unrelated to parliamentary tactics such as filibustering that have come under criticism from officials and pro-establishment lawmakers.

The four ousted legislators are Alvin Yeung, the leader of the Civic Party, fellow party members Kwok Ka-ki and Dennis Kwok, and Kenneth Leung, who represented the accountancy sector.

Half of the city's 70-member legislature is directly elected by the public, with the other half chosen by industry bodies. The pro-democracy legislators said they would tender their resignations during the legislative session Thursday.

Two other pro-democracy-leaning legislators who are not part of the alliance between the various democratic parties said they would stay on.

The ouster of the four colleagues put the pan-democratic bloc "between the devil and the deep blue sea," said Steve Tsang, the director of the School of Oriental and African Studies China Institute. Staying under what they deem illegitimate conditions would be difficult, he said. Yet withdrawing together from the legislature gives Beijing what it wants: a compliant group that will do what is required of it.

Since the politicians were elected with the mandate to fight for democratic rights in Hong Kong, the decision to resign was inevitable, said Mr. Wu, the leader of the pan-democratic bloc. Beijing's decree violates the Basic Law, the city's mini-constitution, he added, and takes away checks and balances on the government.

China's national security law has sent a chill throughout the city, targeting hostile media, dissent in schools and activism on social media. Beijing has cracked down on dissent this year after months of sometimes violent antigovernment protests paralyzed the city at times last year.

The right to democratically elect the city's chief executive and the entire Legislative Council had been a key demand of antigovernment protests.

In an emotional press conference Wednesday, the 19 legislators began by holding hands and chanted "Hong Kong Add Oil!" We Stand Together!"-using a popular protest refrain-and vowed to continue fighting for democracy in the city.

Many of those who resigned Wednesday were often seen on city streets alongside protesters. Some used their position as elected representatives to act as a buffer between police officers and protesters, despite on occasion being arrested for those actions.

Over the years, legislative council elections were colorful and feisty affairs, with many of the positions hotly contested around different districts of the city. The 35 seats that can be directly elected are the most powerful public positions that are democratically chosen in the city.

Over the past few years the government has increasingly moved to disqualify legislative candidates and in 2017 won a court ruling to oust four pro-democracy lawmakers it said failed to properly execute their oaths.

Wednesday's ruling from Beijing spells out conditions in which legislators could immediately lose their seats. Those include supporting independence for the territory, endangering national security and refusing to recognize China's sovereignty over Hong Kong. The legislators must also uphold their allegiance to the city.

"This fundamentally changes the Legislative Council," said Mr. Yeung, one of the disqualified lawmakers. "It's a blatant humiliation to this legislature that is already run short of legitimacy and respect from the people."