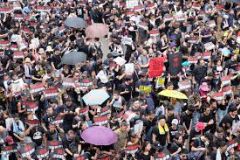 For the second day in a row, thousands rallied on Sunday in Hong Kong to protest mob violence and what they say is police brutality against peaceful marchers. And for the second consecutive day, the police fired tear gas and rubber bullets at the throngs.

On Saturday, riot police officers unleashed pepper spray and rubber bullets and clashed briefly with demonstrators in a train station in a northern town. Barely 24 hours later, clashes erupted again that turned parts of downtown Hong Kong into a tear gas-filled battlefield as riot officers beat back demonstrators who tried to approach the Chinese government's representative office in the territory.

The police on Sunday fired dozens of rounds of tear gas starting from about 7 p.m. and charged protesters, sending hundreds of bystanders who were watching nearby scrambling for shelter. Groups of riot officers with clubs chased black-clad protesters down alleys in the dense urban district.

In some areas, as the police sought to disperse the demonstrators, they beat them with batons and shields, pressed them to the ground and cuffed them. Some protesters appeared injured.

The police said protesters had thrown bricks and other hard objects as they charged police lines.

"I am really shocked," said Isaac Chan, a lawyer who lives near the liaison office, saying he was upset about the police response and the use of tear gas.

Mr. Chan, 36, said he supported the protesters but had not participated in any demonstrations. "It is complete violence by the police," he said. "Ridiculous."

This was the third straight weekend that violent clashes had broken out since the demonstrations began nearly two months ago over an unpopular bill, since shelved, that would have allowed extraditions to mainland China. Since then, the demonstrations have grown into almost daily public displays of vitriol against the police, Hong Kong's leaders and the government in Beijing, throwing Hong Kong into its worst political crisis since it was returned to Chinese rule in 1997.

The chaos on Sunday unfolded across several districts, moving from the Police Headquarters to a major shopping area and then near the central government's offices in the west. Many shops locked their doors early and rolled down steel barriers. Streets were emptied after the police pushed back protesters, and cars slowly navigated around protester barriers left in the roads. Tourists and residents turned onto streets filled with tear gas, only to retreat coughing and with eyes burning.

The police, armed with full-length shields, helmets, batons and gas masks and backed by lines of police vans with sirens blaring, formed tight rows several yards across from the protesters, who wore helmets and gas masks and formed their own line with makeshift shields fashioned from street signs they had ripped off, umbrellas and trash bins. The police sent out advisories warning residents living in affected neighborhoods to keep their windows shut because tear gas would be deployed.

Hong Kong's embattled leader, Carrie Lam, has come under pressure from Beijing to restore order in the territory. In addition to the full withdrawal of the extradition bill, protesters have demanded an expansion of direct elections and an independent investigation into police use of force.

Mrs. Lam, who suspended the extradition bill, has refused to make any further concessions to the protesters and appears confident her administration can wait out the protest movement despite the escalating violence.

The authorities had banned marches in the city this weekend, citing concerns of violence, but that did not stop protesters from turning out on Saturday in Yuen Long, a satellite town where a mob had attacked demonstrators a week earlier. The protesters on Sunday also ignored a police ban against marching to the western part of Hong Kong Island.

The last stop of the banned march on Sunday was supposed to be close to the central government's representative office. As a symbol of Communist Party rule, the office has for years been a target of the pro-democracy movement that has sought to fight what it denounces as the erosion of freedoms that set Hong Kong apart from the rest of China.

But on Sunday, after gathering downtown, thousands of protesters unexpectedly started marching in the opposite direction of the liaison office. No police officers were seen until the crowd reached Police Headquarters, where a handful of officers appeared behind barriers as hundreds of protesters shouted slogans outside.

The protesters filled Hennessy Road, the center of a major shopping district in the Causeway Bay district, and began building barriers from sidewalk railings.

Hundreds more headed toward the liaison office about three miles away, where they faced off against riot police defending the building, and threw things at the officers. The officers fired tear gas and shouted warnings that the protesters were participating in an illegal gathering.

The police said that some protesters had set ablaze a cart and pushed it toward a police cordon. "Police condemn the protesters' escalating violence and appeal to everyone at scene to stay calm," the government said in a statement.

The police said early Monday that 49 people had been arrested on charges including unauthorized assembly and possession of an offensive weapon.

Before the protest on Sunday, workers had erected barriers around the liaison office and glued down nearby pavement stones to prevent them from being dug up and hurled by demonstrators.

Protesters had defaced the liaison office a week ago, painting slogans and throwing eggs and ink at a crest of the Chinese state. That vandalism set off days of vociferous denunciations from Chinese officials.

A statement from the authorities in Beijing said the actions "openly challenged the authority of the central government." On Wednesday, a spokesman for the Chinese Ministry of National Defense cited the damage to the liaison office when he warned that the military could be called upon to quell unrest in Hong Kong.

In recent days, protesters have also been angered by reports that one of the central government office's district staffers had given a speech in Yuen Long urging residents to drive out demonstrators.

Last weekend, a group of men, including some accused of having connections with the gangs known as triads, assaulted protesters and others in a Yuen Long train station. At least 45 people were injured.

The liaison office has dismissed alleged links to the Yuen Long violence as "malicious rumors." But it is facing increasing scrutiny over its role in Hong Kong, which is a semiautonomous part of China that has operated under a model of "one country, two systems" since its 1997 return from British control.

On Saturday, tens of thousands of protesters marched in Yuen Long and some tried to set up barricades near villages. Riot police officers fired rubber bullets and tear gas, and clashes broke out. Thirteen people were arrested, including the organizer.

Prohibitions on protests are generally rare in Hong Kong, but they have been used in the past two days as the authorities try to contain the unrest.

Weeks of protests have also exacerbated divisions between government leaders and some of the rank-and-file police officers assigned to confrontational protests. Police associations denounced the No. 2 official in Hong Kong, Matthew Cheung, after he apologized on Friday for the authorities' failure to stop the Yuen Long mob attack.