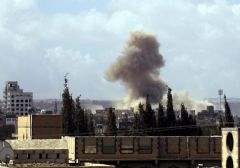 Saudi Arabia has been accused over a "worrying pattern of attacks" in Yemen after another charity-run medical facility was bombed - killing at least four people.

Humanitarian organisation Doctors Without Borders (MSF) said the Shiara Hospital in the Razeh district was hit by one projectile.

Another bomb fell nearby the hospital, but the organisation said they could not confirm the origin of the attack.

Raquel Ayora, MSF Director of Operations, said: "We strongly condemn this incident that confirms a worrying pattern of attacks to essential medical services and express our strongest outrage as this will leave a very fragile population without healthcare for weeks."

The charity said four people had died and 10 were injured. Three of the injured are MSF staff, where two of them are in a critical condition.

It is the latest bombing in what is thought to be a series of attacks on a health facility directly managed or supported by MSF in the past three months.

In October, Haydan hospital was destroyed in an air-strike by the Saudi-led coalition (SLC). A mobile clinic in Taiz, south west Yemen, was also hit in December, which wounded nine people, where one later died.

MSF said the attacks were in breach of International Humanitarian Law (IHL) and demanded they be investigated.

All staff and patients at the Shiara Hospital were evacuated, and those needing care received it Al Goumoury hospital in Saada, north west Yemen.

Ms Ayora said: "All parties to the conflict, including the SLC, are regularly informed of the GPS coordinates of the medical sites where MSF works.

"We are in constant dialogue with these parties to ensure that they understand the severity of the humanitarian consequences of the conflict and the need to respect the provision of medical services.

"There is no way that anyone with the capacity to carry out an airstrike or launch a rocket would not have known that the Shiara Hospital was a functioning health facility providing critical services and supported by MSF.

"We reiterate to all parties to the conflict that patients and medical facilities must be respected and that bombing hospitals is a violation of International Humanitarian Law."

The Shiara Hospital had been bombed before MSF supported it, which reportedly led to a reduction in its services.